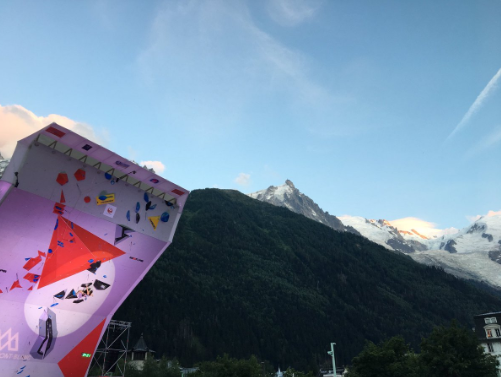 The Slovenian, who won at the opening International Federation of Sport Climbing World Cup in Villars last week, produced another fine performance to put herself in gold medal position with only Pilz left to climb.

But the Austrian rose to the challenge, keeping her nerve in front of a large and appreciative crowd to claim overall victory in becoming the only women's finalist to top.

First Gold ever for Jessica Pilz in #IFSCwc Chamonix! Thunderous applause for her second podium in a row! pic.twitter.com/xQfMiXjSgj

Garnbret took silver, with bronze on the night going to South Korea's Jain Kim as the event's backdrop in the French ski resort, Mont Blanc, began to disappear in darkness.

Ghisolfi was the first in the final to top the route, with only two more left to climb - Germany's Alex Megos and Jakob Schubert of Austria, winner in Villars a week earlier.

But neither man could knock the Italian off the top of the podium.