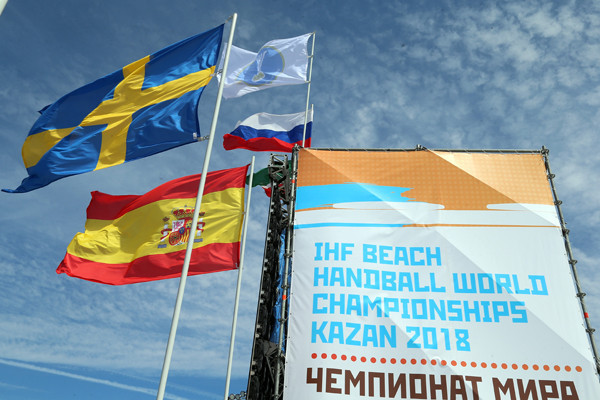 Croatia and Spain will begin their bids to defend their respective men's and women's titles when the Beach Handball World Championships begin in Kazan in Russia tomorrow.

The six days of competition are scheduled to take place at the Kazan Beach Sports Complex.

In the men’s draw, Croatia have been drawn against Iran, Uruguay and Argentina in Group A.

Group B is made up of Spain, Hungary, Vietnam and New Zealand, while Group C comprises Oman, Australia, Denmark and 2016 bronze medallists Qatar.

Reigning women’s champions Spain have been drawn against Australia, Greece and Paraguay in Group A.

Group B is made up of Poland, Uruguay, France and Chinese Taipei, while Group C comprises Thailand, Russia, the US and 2016 silver medallists Brazil.

Last year's third-place finishers Norway are in Group D along with Denmark, Vietnam and Mexico.

The top three from each group will advance to the main round, which is made up of Group I and Group II.

Points obtained against teams from the same group will be carried over.

The top-four finishers in Group I and Group II will then advance to the quarter-finals, which are due to take place on Saturday (July 28) along with the semi-finals.

The finals are scheduled for Sunday (July 29).

"We are sure already that this will be a spectacular event," Joel Delplanque, the International Handball Federation (IHF) first vice-president and IHF representative at Kazan 2018, said.

"Kazan is the sports capital of Russia and is well-known everywhere, and we have spoken with everyone on the Organising Committee in detail and they are ready.

"We are working hard with the International Olympic Committee to include beach handball inside the Olympic programme.

"Of course, beach handball will be in the Olympic programme next October with the Youth Olympic Games taking place in Buenos Aires, Argentina.

"Beach handball will also be on the programme for the ANOC (Association of National Olympic Committees) World Beach Games in San Diego, USA next year and were also preparing a showcase event during the Tokyo 2020 Olympic Games.

"So Kazan is not only a great sporting event, but a political event too.

"Thank you to the Organising Committee for preparing everything and we are sure everything will run in the right way."