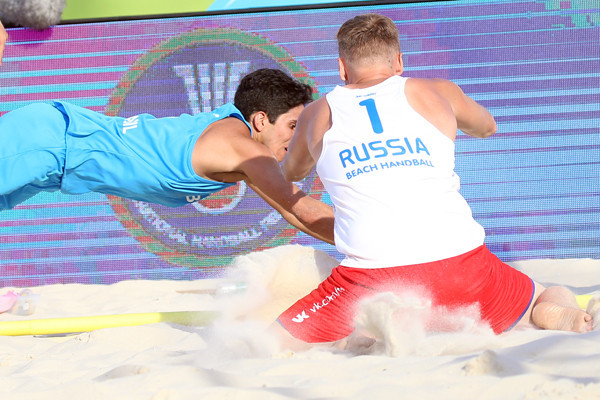 Spain and defending champions Croatia booked their places in the quarter-finals of the men’s Beach Handball World Championships in the Russian city of Kazan today.

Both teams won the opening groups at the tournament to reach the main round of competition, which began at the Beach Sport Complex.

Spain were able to clinch 2-0 wins over Iran and Uruguay to preserve their unbeaten record in Group One, with results against teams in their first round having carried over.

It put them on four wins overall, with Croatia matching the feat by beating Hungary and Vietnam 2-0 in their matches today.

Spain and Croatia will meet tomorrow to determine the group winners.

The final quarter-final places in the group were sealed by Hungary and Iran, who earned victories over Uruguay and Vietnam.

It sealed their spots in the last eight, with Uruguay and Vietnam now unable to advance.

Sweden are assured of topping Group Two as they remain the only unbeaten team in the group, following 2-0 wins over Oman and Denmark.

It leaves Sweden top of the group with three wins, with Russia and Brazil lying second and third with two.

Spain🇪🇸 remain undefeated and secure a 2-0 victory over Chinese Taipei in the main round at kazan 2018!💪🏼 #HeatInKazan pic.twitter.com/6E2WTEJUoz

Qatar currently occupy the final quarter-final spot, but Denmark and Oman both have one win to their name and could claim a place when the final round of main round fixtures take place tomorrow.

Spain and Poland are assured of places in the quarter-finals of the women’s competition, with the teams having four and three wins to their name in Group One.

Greece are best placed to earn one of the remaining two places as they have two wins, with Paraguay, Uruguay and Chinese Taipei all boasting one.

Group Two is headed by Norway and Brazil, who both have three wins to their credit, which is matched by the hosts.

Denmark occupy the final quarter-final place with one win, while Vietnam and Thailand are yet to get off the mark.