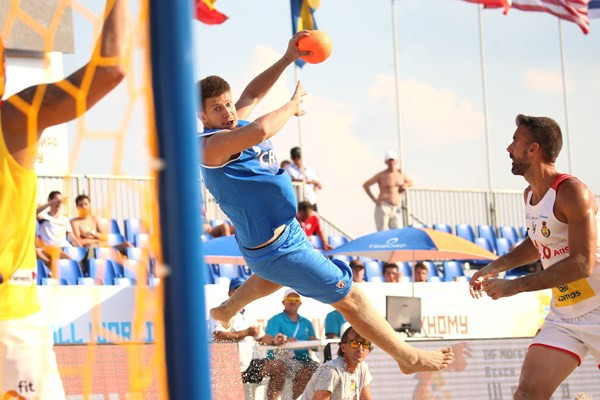 Croatia will defend their men’s Beach Handball World Championships title against Brazil tomorrow evening - but their counterparts in the women’s tournament, Spain, suffered defeat in their semi-final today at the hands of an inspired Greek team.

The Greek women came from behind to win 2-1, thus earning themselves a place in tomorrow’s gold medal match at the Beach Sport Complex in the Russian city of Kazan, where they are due to meet Norway, who defeated Brazil 2-0 in their semi-final.

Earlier in the day, Greece had beaten the hosts 2-1 in their quarter-final, while Spain had progressed with a 2-1 win over Denmark.

In the other women’s quarter-finals, Brazil beat Paraguay 2-0 and Norway beat Poland 2-1.

Croatia earned their place in the men’s final with a 2-0 victory over Hungary 2-0 in their semi-final, while Brazil came through after winning 2-0 aganst against Sweden.

The defending champions had moved through to the semi-finals with a 2-1 win over Denmark in the opening knock-out stage of this International Handball Federation event.

Hungary had defeated hosts Russia 2-0 in their quarter-final.

Brazil had reached the last four with a 2-1 win over Spain, whose winning run was only ended in the final group match against Croatia on Friday.

The Spaniards went on to beat Iran 2-0 and reach the fifth-place play-off game, where they will meet the hosts, who defeated Denmark 2-1.

Denmark and Iran will contest men’s seventh place tomorrow, while 2-0 victories over New Zealand and the United States earned Qatar a place in the ninth place play-off, where they will face Oman, whp progressed with 2-1 wins over Australia and Argentina.