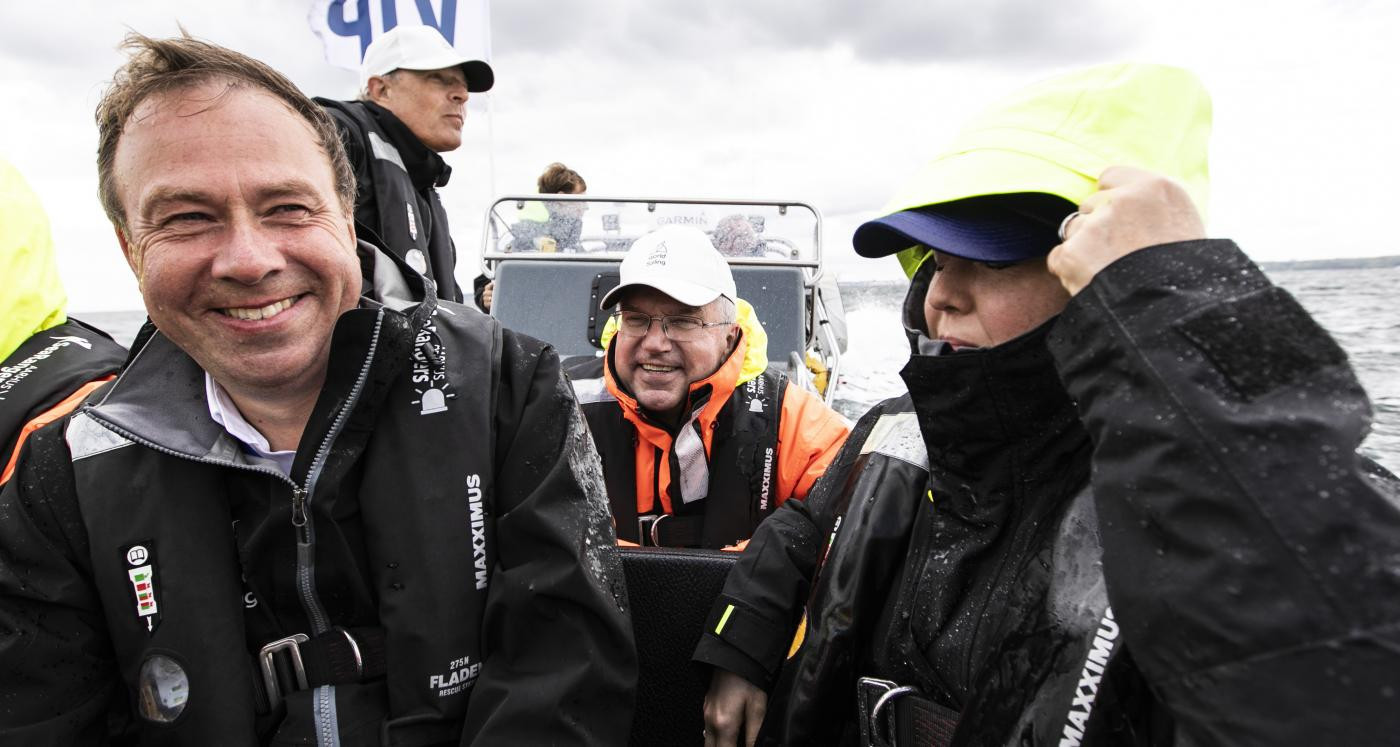 On a day when International Olympic Committee (IOC) President Thomas Bach came visiting, France's Louis Giard made a flying start in the men's RS:X windsurfing category at the Sailing World Championships in the Bay of Aarhus.

Asked by World Sailing about his expectations for sailing at the Tokyo 2020 Games, where events will take place at Enoshima, Bach replied: "First of all I think it will be a great competition but the most important thing will be that with the technology available in Tokyo there will be a huge opportunity for sailing to make the sport more popular across the globe and to demonstrate the fascination this sport can enjoy - because with this new technology you can follow it much closer and much better than ever before.

"With the organisation we have no worries.

"There is World Sailing and our Japanese friends will put up a sailing event at Olympic level in every respect,

"I really have no doubts.

"On the other hand, from the sports perspective you see the competition getting stronger and stronger.

"The sailors are getting closer and closer and this will add to the quality of the competition."

Asked about the Olympic future of sailing, Bach responded: "Sailing first of all is facing the same challenge as most of the Olympic sports; this about the young generation.

"We in sports are in competition for the time of the young generation.

"You need to get their attention and attract them to sport, sailing is one of the many.

"The second challenge for sailing is about making a regatta more understandable, giving a better experience for the spectators and the other challenge is the always evolving programme because you have more and more classes, more and more technology, on and around the boats.

"Sailing is facing the same challenge like the IOC overall to find the good balance between tradition and progress also when it comes to the Olympic programme."

Giard's compatriot Nicolas Parlier underlined his position as huge favourite in the men's kiteboarding by winning all six of his races on his World Championship debut.

France's Theo de Ramecourt was almost as dominant in the second fleet.

And Daniel Moroz showed why she is the favourite in the women’s kiteboarding by winning the last two of her three races, having finished second in her opening race.

Italy's Ruggero Tita and Caterina Marianna Banti, favourites in the mixed Nacra 17 class, also underlined their credentials by winning all three of their races in choppy conditions that were too much for many in the fleet.

On a grand day for France, their sailors in the 49er class overhauled the New Zealand leaders.

Two third places took France's Lucas Rual and Emile Amorol top of the leaderboard, ahead of the two New Zealand crews in this huge 86-boat class with three fleets.

But two powerful crews have moved ominously onto their shoulders - Croatia's Sime Fantela, Rio 2016 Olympic champion in the 470, and his brother, Mihovil Fantela, and Australia's William Phillips and Iain Jensen, Olympic gold medallist in 2012 and silver medallist in 2016 with Nathan Outteridge, who is standing in for Phillips' injured brother Sam.

Local Danish favourites Ida Marie Baad Nielsen and Marie Thusgaard Olsen, who have grown up racing in the Bay of Aarhus, moved to the top of the leaderboard in the 49her FX class with a solid third and fourth.

Britain's Charlotte Dobson and Saskia Tidey had a second place and a win to move into second overall.

Despite a 13th and a fourth place, New Zealander Sam Meech, bronze medallist at the Rio 2016 Games, remained top of the laser class, although the field of Olympic and world champions is now bunched much more closely behind him.

The surprise is that The Netherlands' Olympic champion, Marit Bouwmeester, is still back in ninth after a 16th place in her first race of the day.

The finn, men's 470 and women's 470 were on a rest day and will recommence in gold and silver fleets tomorrow.