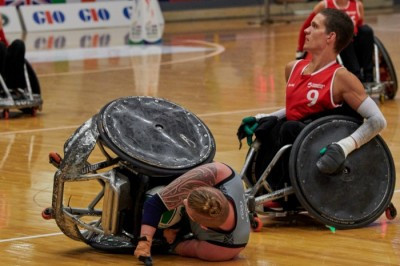 Canada suffered another surprise defeat on day two of the Wheelchair Rugby World Championship in Sydney.

The world number three ranked side lost to France in Pool B yesterday and were beaten again today by Poland.

It was a close contest but the European nation edged home 45-43 at the Quaycentre in the Australian city.

"It was a tough game, but we beat Canada - a big team with huge history," said Poland's Mateusz Wawczak, whose side were well beaten by Britain on day one.

"We are so happy we beat Canada today and we are waiting for another game tomorrow.

"It was our tactic to start as hard as we can and I think it was a good tactic.

"After you have the game on your side, you can control more.

"It was a perfect day for us."

Five teams remain unbeaten as group play continued at the Quaycentre and the Genea Netball Centre.

This includes Denmark, who have now won all three of their matches.

They beat neighbours Sweden in Pool A yesterday and were in action twice today, beating Ireland 56-47 and New Zealand 55-54.

Australia, Japan, France and the United States all have two wins from as many games.

Hosts and defending champions Australia rolled past the Swedes 71-38 in Pool A as they look to add to their Rio 2016 Paralympic title.

Sweden also collected a Pool A win today, opening their account by beating winless Ireland 52-47 as both teams played their second matches of the day.

Group action continues tomorrow, with the top two in each pool reaching the semi-finals.