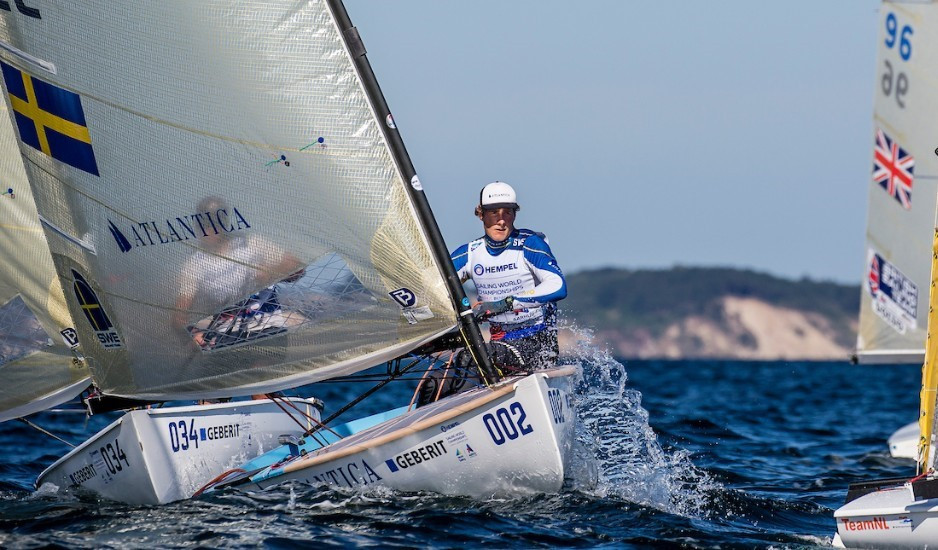 Olympic gold medallist Max Salminen of Sweden won the day's last race in the finn class to take a potentially decisive lead in the overall standings at the World Sailing Championships in Denmark.

Salminen, the defending champion, who won Olympic gold in the star class at London 2012, has 60 points going into tomorrow's medal race in the regatta following a tricky day in Aarhus.

The Swede's victory in the final race saw him seize control of the event, with Hungary's Zsombor Berecz and Josh Junior of New Zealand both on 68 points.

"I’m tired after today, but it’s a huge relief to qualify my nation and go into the medal race as the leader," said Salminen.

"I can see the Olympics in my vision.

"It’s nice to have a chance to defend my world title after a long week.

"So far, the competition in my fleet has been great and it’s a shame that we’re missing Giles Scott.

"It’s always good to have a buffer, especially on a tricky race like this, but there is not much of a game I can play – I just have to sail my best."

Sweden's Anton Dahlberg and Frederik Bergström are also in pole position for gold but the European champions saw their lead cut to six points in the men's 470 class.

Dahlberg and Bergström have a total of 44 points, while the Japanese team are second on 50 points along with Kevin Peponnet and Jermie Mion of France.

Olympic silver medallists Mat Belcher and William Ryan are 13 points off the pace in fourth and are still in with a chance of clinching the world title.

Let's look at the 49erFX standings after today's three races.

Bryant & Wilmot 🇦🇺 are second, and Bekkering & Duetz 🇳🇱 are three points behind in third.

Pavlos Kontides of Cyprus, the reigning world champion and London 2012 silver medallist, leads the way in the laser class after he claimed second place in today's only race.

Kontides has a three-point lead over nearest challenger Matthew Wearn of Australia, whose team-mate Tom Burton is a further two points adrift in third.

Austria’s Tanja Frank and and Lorena Abicht negated the tough conditions in style as they won today's last race to take first place at the halfway stage of the gold medal fleet.

Frank and Abicht have 47 points and lead the Australian pair of Natasha Bryant and Annie Wilmot by five.

Annemiek Bekkering and Annette Duetz of The Netherlands occupy third with three races to go.

The event in Aarhus continues tomorrow.