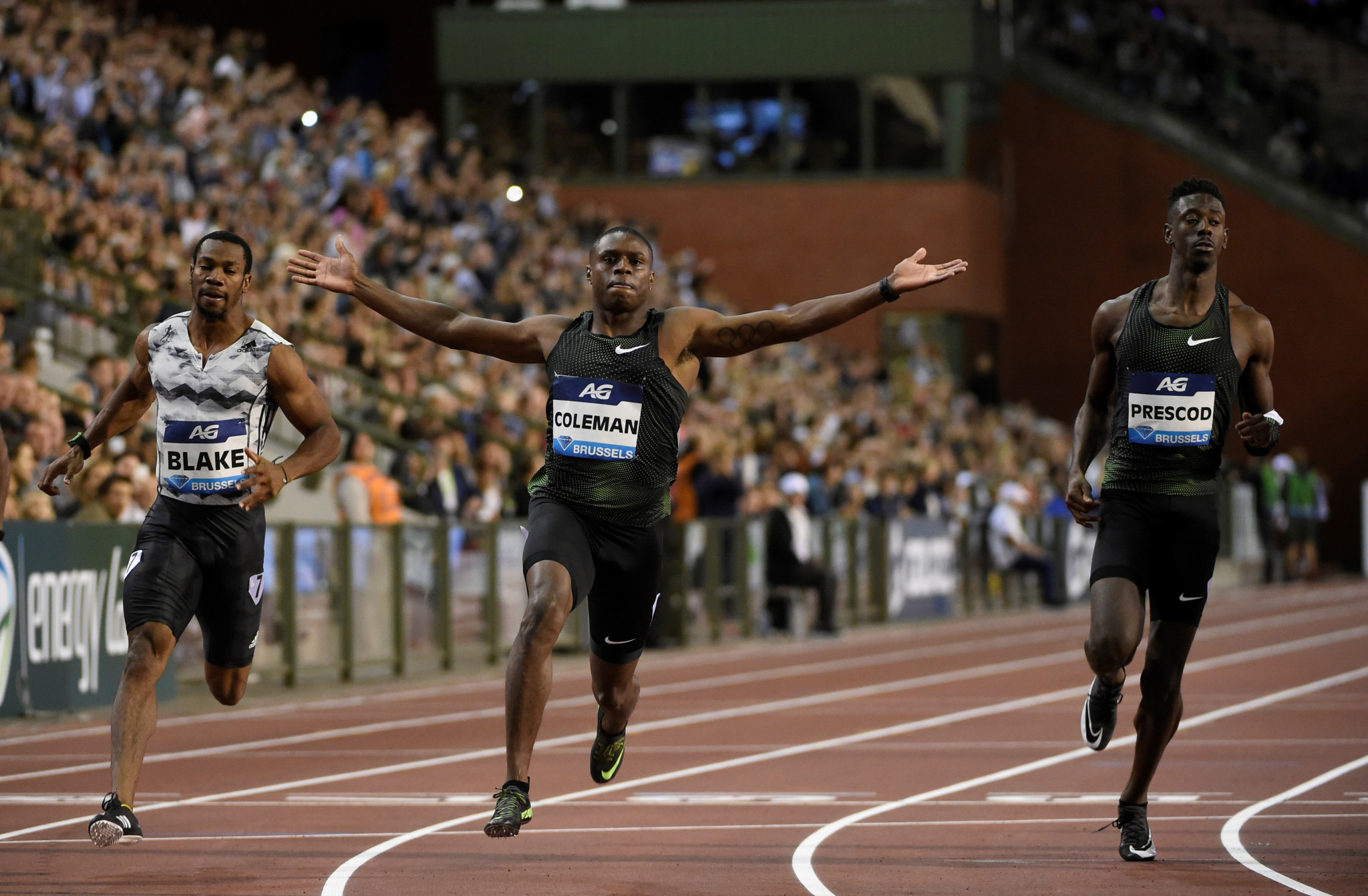 Twenty-four hours after the first Diamond League final in Zurich produced one of the most remarkable of 3,000m steeplechase victories for Kenya’s Conseslus Kipruto despite his losing a shoe just over a minute into the race, this was the first answering surprise from Belgium.

Coleman's team was the seventh fastest in history and quickest produced anywhere for three years.

He beat his compatriot and favourite Ronnie Baker, second in 9.93, while Jamaican Yohan Blake was third.

Croatia’s world and Olympic discus champion Sandra Perkovic, dominant all season and targeting a record seventh consecutive Diamond League title, could do no better than third in another shock result.

And another; in the men’s 5,000m victory went to Ethiopia’s18-year-old Selemon Barega in a world junior record, 2018 world lead and Diamond League record of 12min 43.02sec.

Miller-Uibo chose not to defend her 400m title on the night – so her rising young rival Salwa Eid Naser put herself out to claim it in 49.33, a day after winning 4x100m gold and 4x400m silver at the Asian Games in Jakarta.

“I’ve been dominating and I was like, this is the last one … I had a fighting mindset," Naser said.

Laura Muir, who successfully targeted winning the European 1,500m crown earlier his month, did the same again to earn her second Diamond League title in 3:58.49, taking her revenge on the American who beat her in Monaco, Shelby Houlihan, second in 3:58.94.

European 5,000m champion Sifan Hassan, who had been driven through the night after finishing second in the Zurich 5000m, was third in 3:59.41.

Like Hassan, Colombia’s Olympic triple jump champion Caterine Ibarguen was another to do the Zurich-Brussels double, and for her it was golden as, having regained her Diamond League title in her main event, she won the long jump with a best of 6.80m.

Perkovic’s night ended in frustration as she could only throw 64.31m in a contest won by Cuba’s Yaime Perez with 65.00.

It was the first time since the 2014 Continental Cup that she had finished outside the top two in a competition.

Another athlete seeking a seventh Diamond League title, world and Olympic triple jump champion Christian Taylor, also drew a blank as he finished second with 17.31m behind his perennial rival Pedro Pablo Pichardo, once of Cuba but now of Portugal, who cleared 17.49m.

Meanwhile the only athlete to have seven Diamond League titles to their name, France’s world pole vault record holder Renaud Lavillenie, stayed at seven after finishing fifth with 5.73m as 21-year-old Authorised Neutral Athlete Timur Morgunov - who won Wednesday night’s exhibition contest in Zurich’s main station with the last vault of the competition, a personal best of 5.91m – with 5.93m.

Australia’s Commonwealth Games pole vault champion Kurtis Marschall had to withdraw after injuring his leg in a fall to the side of the mat.

Sergey Shubenkov, beaten in the European final by two thousandths of a second, restored his seasonal domination with victory in 12.97 - his fourth sub-13 time of the summer.

Her compatriot Emmanuel Korir was a similarly unsurprising winner of the men’s 800m in a relatively conservative 1:44.72.