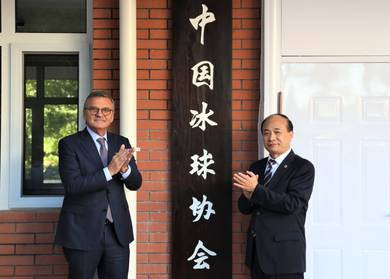 International Ice Hockey Federation (IIHF) President René Fasel has claimed the opening of the Chinese Ice Hockey Association's (CIHA) new offices marks a "landmark moment" for the development of the sport in the country prior to the 2022 Winter Olympic Games in Beijing.

Fasel was in attendance at an inauguration ceremony held in the Chinese capital to officially open the facility, which will serve as the main hub for ice hockey in the country.

The event was held as China continues its development efforts in the sport in the build-up to Beijing 2022.

"This is a landmark moment in the development of Chinese ice hockey," said Fasel.

"Prior to the creation of the CIHA ice hockey was under the stewardship of a general ice sports association, but now ice hockey under the guidance of the CIHA has the potential to grow bigger than ever before.

"The CIHA is prepared with good leadership and good staff.

"Looking ahead to Beijing 2022 I think we are starting on a very positive way forward."

The visit coincided with the National Hockey League (NHL) China Games between the featuring the Boston Bruins and the Calgary Flames.

The matches have been viewed as an attempt by the NHL to grow their fanbase in the Chinese market.

NHL Commissioner Gary Bettman has claimed they are committed to expanding their reach in China, regardless of whether players from the world's top ice hockey league participate at Beijing 2022.

NHL players did not compete at the 2018 Games in Pyeongchang as the involved parties failed to reach an agreement.

"I am proud of all of you as ones among the three million people.”"