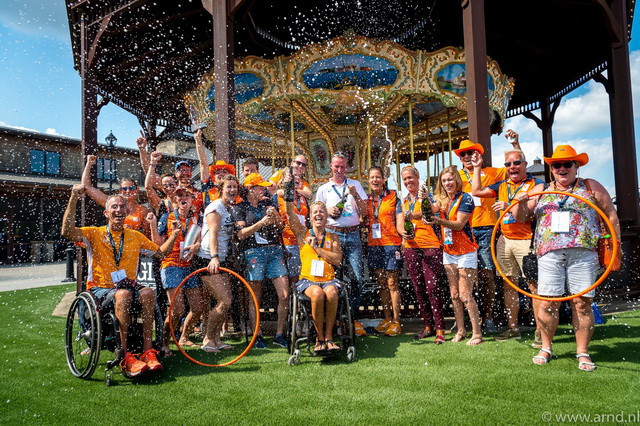 The Netherlands knocked Britain off the top of the podium for the first time at European, world and Paralympic championship level as they won the Para dressage team competition at the International Equestrian Federation (FEI) World Equestrian Games in Tyron.

In so doing, the Dutch team also secured the first team spot, out of three, to qualify for the 2020 Paralympic Games in Tokyo, with Britain claiming the second.

"I feel like I just can’t believe it," said Joyce Heuitink, the Team Netherlands Chef d’equipe.

"It’s been a dream since I started this job six years ago after London 2012 and the gap with Great Britain was so big.

"But every year the gap seemed to be getting closer so we kept working hard and just worked on everything that we can.

"But we were so nervous and thought ‘what if they beat us by just one per cent?"

Van der Horst, the first of three Dutch riders to go on the final day of the event, scored 73.559 per cent on Findsley.

That left the door slightly open for Britain to catch up if their last two riders, Natasha Baker and Erin Orford were able to score in excess of 73 points.

Baker rode first and was the highest scorer in the grade, with a personal best 74.118 per cent on Mount St John Diva Dannebrog.

Orford, competing at her first global championships on Dior, then scored 69.029 per cent.

In the end the gap between the two countries was just 0.622 of a percentage point.

Changing of the guard at the top of Para Dressage!@RuitersInOranje today became FEI World Champions for the very 1st time! But @TeamGBR weren't going down without a fight.

With just 0.64 between them, the future is bright for Para Dressage! ? #Tryon2018 pic.twitter.com/H2pORe7Pyt

Heuitink added: "We watched Erin [Orford, Great Britain’s final rider] and said we would not be noisy.

"We gave her good applause and waited to be sure it was on the scoreboard that we were ahead and then her score came up and it was true.

"My team manager went straight to the general store to get champagne.

"I’ve been full of tears for the last two days and I’m afraid I will break into tears when I stand on the podium!"

With the top two spots decided in the first session of the day, the afternoon’s grade I contest turned into a battle between Germany and Denmark for bronze, and the final qualifying spot for Tokyo 2020.

Riding Fuerst Sinclair, Philipp scored 74.375 per cent and Germany were on their way to Tokyo 2020 by just 0.150 of a percentage point.

By winning the competition Hosmar and den Dulk picked up their first world gold medals.

Speaking after the ceremony Hosmar said: "We worked hard for it and finally we beat the British.

“We have freestyle tomorrow so we won’t celebrate too much tonight, but tomorrow night I think we will.”

The Para Dressage competition is due to come to an end tomorrow as the top eight riders and their horses in each of the five grades compete for the freestyle title.