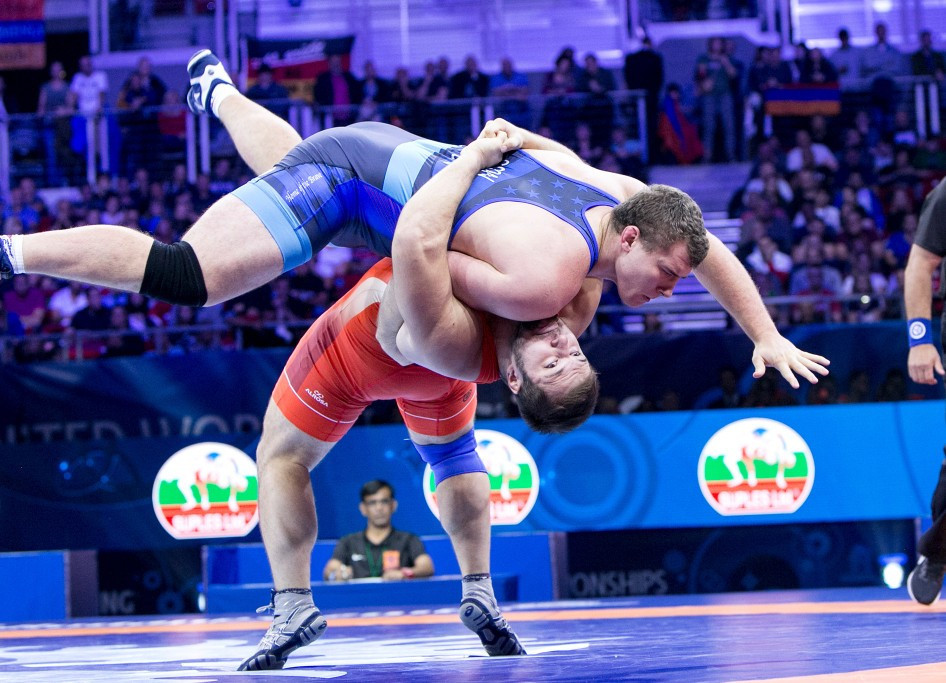 Their victories tonight mean the country won five of the last six world titles contested at the Papp László SportArena, and 10 in all, after Sergei Emelin and Artem Surkov won gold last night.

Two four point throws and a push-out saw the final score read 9-0 in the Russian's favour, who had previously won a world title at under-23 level.

The bronzes in that category, meanwhile, went to South Korea's Minseok Kim and Cuba's Oscar Pino Hinds, after two uneventful matches in which the scores read 2-1 and 3-1 respectively.

Then, in the Greco-Roman 97kg, the gold was won by Musa Evloev.

Again, he won with relative ease, sealing the world title with a 7-1 victory over Bulgaria's Kiril Milov.

His victory followed what we could, perhaps, label as one-and-a-half bronze medal matches.

Iran's Mahdi Aliyarifeizabadi was awarded the second bronze by default after Armenia's Artur Aleksanyan reportedly chose not to wrestle.

The Championships then ended with the final medal matches in the 77kg Greco-Roman.

In the gold medal match hosts Hungary had a chance to win their second world title, but it was not to be as Aleksandr Chekhrkin won a tight final against Tamas Lorincz.

The Hungarian gave it everything but with 10 seconds to go he was still 2-1 behind, before a final push-out sealed the win for the Russian.

The bronzes at 77kg were claimed by Serbia's Viktor Nemes and South Korea's Hyeonwoo Kim.

Tonight's action ended what has been the largest World Championships in UWW history, featuring 901 matches and more than 100 different countries.