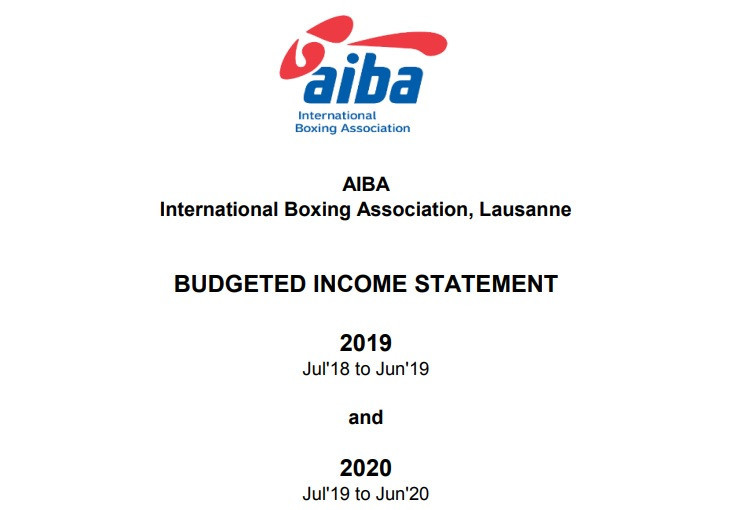 New financial statements give an idea of the scale of the revenue hole that the International Boxing Association (AIBA) might be left facing if it loses its Olympic funding as a consequence of Gafur Rakhimov’s expected election as President in Moscow today.

It is also disclosed that AIBA received a total of $17.3 million (£13.3 million/€15.2 million) from the International Olympic Committee (IOC) for the 2016 Olympic Games in Rio de Janeiro.

So the Olympic payment looks set to account for more than 60 per cent of AIBA’s operating income over the four-year period between Rio and the Tokyo 2020 Games.

While AIBA’s annual income is showing a tendency to rise, with CHF4 million (£3.1 million/$4 million/€3.5 million) budgeted to come from “Sport Events” in 2019-20, there seems little doubt that the Tokyo payment, if it comes, would again constitute a really hefty chunk of projected income over the 2020-24 quadrennium.

If it does not arrive, it would leave a correspondingly large hole.

The IOC have made it clear that they will seriously consider boxing’s position on the Tokyo 2020 programme if Uzbekistan’s Rakhimov is elected permanent President at the AIBA Congress today, in preference to his only rival, Serik Konakbayev of Kazakhstan.

It is thought that, rather than remove boxing from Tokyo, the IOC could suspend AIBA if Rakhimov is elected permanent President, and establish a rival governing body to run the sport.

Last August, Rakhimov suggested that AIBA could have gone bankrupt if it had not signed a “settlement agreement” with an Azerbaijani company called Benkons.

It was said at the time that further discussions would be held for another $3 million (£2.3 million/€2.6 million) to be also covered through sponsorship, which would “significantly improve AIBA’s financial situation”.

A Note in the new documents now indicates that this further $3 million could not ultimately be agreed.

Budgets for the present year and for 2019-20 indicate that AIBA expects to record net profits of around CHF6 million (£4.6 million/$6 million/€5.25 million) over the two years.