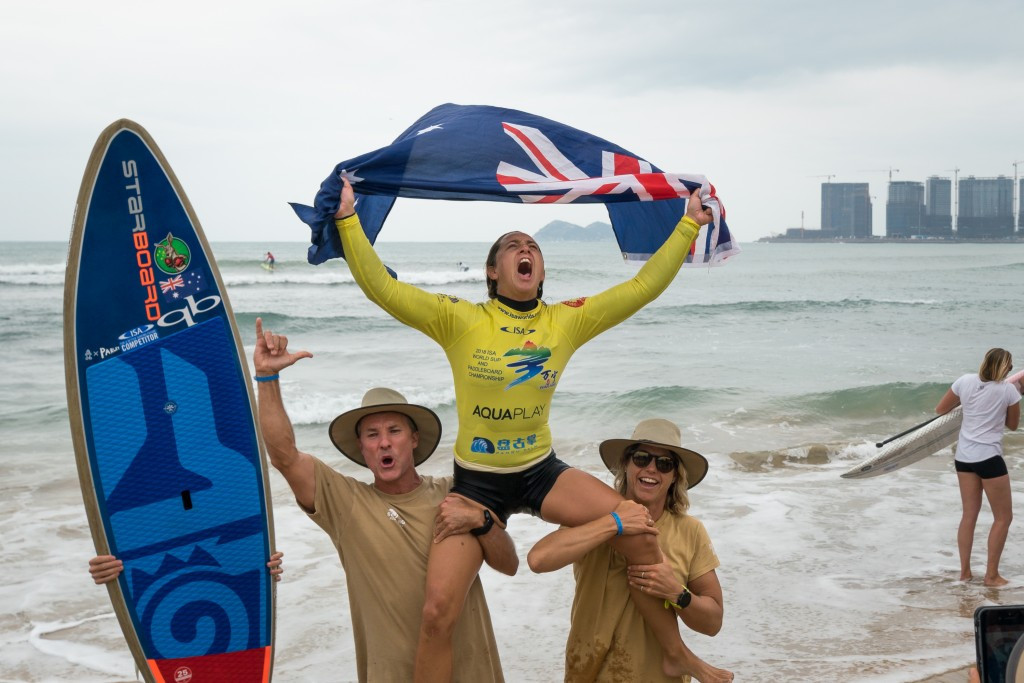 The final saw Westdorp continue her unstoppable run through the competition and notch a pair of seven-point rides on Riyue Bay.

She triumphed with a total of 14.37 points, putting her in a league of her own in the history of ISA SUP surfing.

"I am so stoked to win," Westdorp said.

"I had to go the long way through the repechage, but it paid off in the end.

"It's great points for our team to earn this gold.

"As captain, this is my goal to get us off to a great start."

Spain's Iballa Ruano Moreno earned the silver medal with 12.03 points, while New Zealand's Stella Smith took the bronze with 10.5 and Japan's Yuuka Horikoshi had to settle for the copper with 8.15.

Horikoshi made a critical error and interfered on one of Westdorp's waves.

It resulted in her second wave score being halved.

Moreno’s silver medal was her second in the history of the event.

In the men’s final, Brazil's Luiz Diniz earned an incredible score of 9.5 points in the dying moments to earn his second successive title with a total of 18 - the highest of the event.

Victory secures him a spot in the SUP surfing competition at the 2019 Pan American Games in Lima, where both that and SUP racing are set to make their debut.

"I am so happy to win the gold medal two times," Diniz said.

"I want to thank my family and friends for making this possible."

Brazil's Caio Vaz was the bronze medallist with 12.6 points, while 17-year-old Spaniard Juan de los Reyez finished with the copper on 12.24.

Action in Wanning is due to continue tomorrow with the first of two days of technical races.

"Congratulations to these amazing, repeating world champions and to all the medalists," ISA President Fernando Aguerre said.

"They have gone down in history as the first ISA SUP champions crowned in Asia and mark an important milestone in the ISA's push to grow and develop SUP across all continents of the globe.

"Now that the SUP surfers have got the competition off to an excellent start, we shift gears towards the SUP and paddleboard technical racing where the world's best will vie for titles.

"The best of the best are here in Riyue Bay and eager to make their countries proud with a gold medal."

The United States' Candice Appleby was today's top-performing woman, which earned her a spot in SUP's debut at Lima 2019.