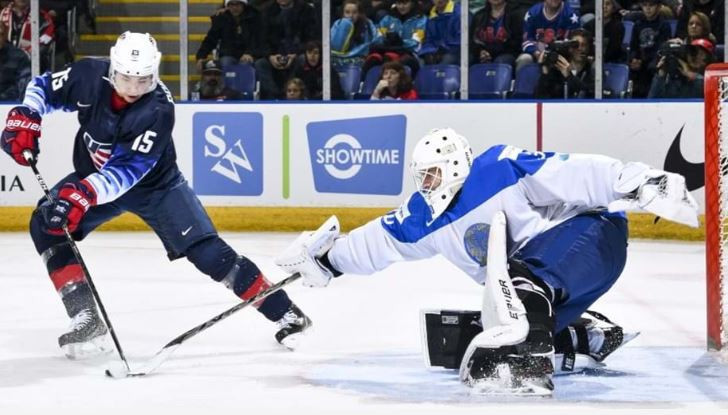 The United States saw of Kazakhstan with ease today 8-2 to maintain their lead of Group B at the International Ice Hockey Federation World Junior Championships in Canada.

The US were missing their star player Jack Hughes today at the Save on Foods Memorial Centre in Victoria, but even without him they were the dominant size, taking 66 shots to Kazakhstan’s 13 to win the match comfortably.

Alexander Chmelevski, Ryan Poehling, Tyler Madden and Josh Norris all then added one each.

"But we’ve got to continue to grow.

"It’s a long tournament and you can’t be satisfied with anything until the end of the day."

The US are level with Sweden in their group on six points, but sit top thanks to their superior goals record.

In today’s only other game Russia beat the Czech Republic 2-1 at the Rodgers Arena in Vancouver.

Two powerplay goals helped them seal the win in front of a crowd of 14,523.

With the match five-on-five the Czechs were the better side, but could not take advantage.

"We had a lot of chances," said their goal scorer Jachym Kondelik.

"We just couldn't get the puck in.

"We just tried too hard on the power play.

"It should be our advantage, but it didn't work out that way today."

The result sees Russia onto six points from two games, level with Canada, though it is the hosts who sit top based on their goals record.

They have scored 17 already to Russia’s six.

Tomorrow four matches are due to take place, with Canada playing the Czech Republic and Denmark facing Switzerland in Group A, while the US face Sweden and Slovakia play Finland in Group B.