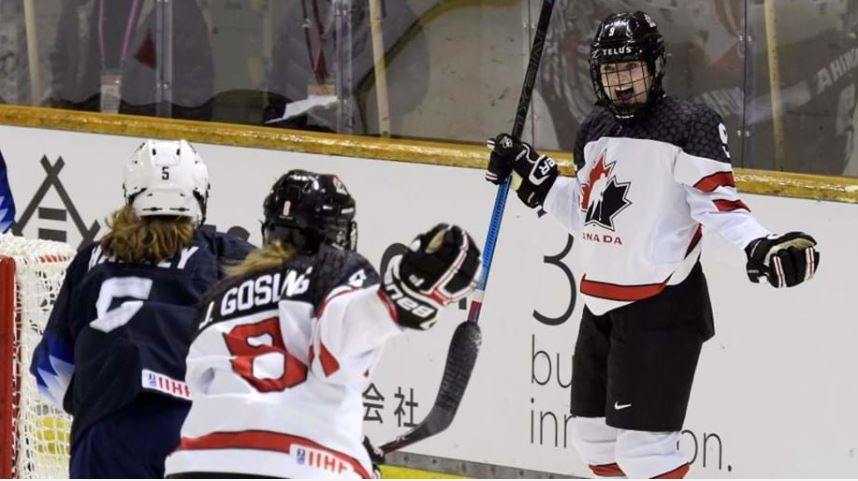 Canada won the International Ice Hockey Federation Women's Under-18 World Championship today with a dramatic overtime winner against the United States in Obihiro.

Maddi Wheeler scored 94 seconds into added time to seal a 3-2 win against the Americans at the Obihiro Arena, ending a streak of four consecutive gold medals for the US.

Canada's victory sees them pick up the title for the first time since 2014.

The game began at a blistering pace with Canada drawing first blood on the game's first power play.

A deflected shot by defenceman Alexie Guay in the eighth minute was originally saved, but it bounced back out to Danielle Serdachny who was able to pop it in.

Both teams had a series of golden opportunities in the second period, with Canada starting off with five against four but failing to score.

Later the US had a five-on-three but also failed to find the net, before Canada had a two-player advantage of their own which again proved fruitless.

The US eventually tied the match after 17 minutes when a quick shot from Makenna Webster from the face-off circle crept under Canada's goalkeeper.

The US then took the lead in the third period when Abbey Murphy knocked in a rebound from close range.

Good chances for both sides followed but again yielded nothing, before a single player advantage helped Canada get their equaliser when Anne Cherkowski converted a great pass for 2-2.

With no further goals the match then went into overtime, with Wheeler grabbing the winner after one minute and 34 seconds.

It was a great individual goal that sealed it too.

Wheeler took the puck down the right-hand side during a four-on-three and then cut in towards the goal.

Her initial shot was saved but she was able to turn in her own rebound, sealing the gold medal for her country.

In the day's other games, Finland beat Russia 3-0 to claim the bronze medal thanks to goals from Viivi Vainikka, Elli Suoranta and Julia Liikala.

The Czech Republic beat hosts Japan 3-1 to relegate them into Division 1A, winning the best-of-three series 2-1.