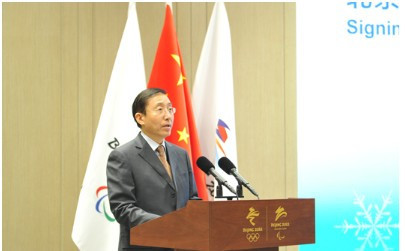 All venues for the 2022 Winter Olympic and Paralympic Games in Beijing will be powered by green electricity following the signing of an agreement between the Organising Committee and the State Grid Corporation of China.

According to the International Olympic Committee (IOC), the clean energy programme will make Beijing 2022 the first Olympic event in history to power all its venues with green and renewable energies produced from clean sources.

The signing ceremony was attended by Zhang Jiandong, the executive vice-president of Beijing 2022 and also the Deputy Mayor of the Chinese capital, and Juan Antonio Samaranch, an IOC vice-president and Coordination Commission chair for Beijing 2022.

As reported by China.org.cn, Zhang claimed that powering the Olympics venues with green energy is an effort in delivering on Beijing's bidding promises, as well as an active response to the sustainability requirement of Olympic Agenda 2020 and the New Norm - an ambitious set of 118 reforms that re-imagines how the Games are delivered.

He added that he hopes the power suppliers would ensure clean, reliable, and cost-effective energy for the Olympics venues, which will strengthen management on power and adopt energy-saving equipment.

A group of 23 other members were also been chosen from colleges, research institutions and Government departments related to the environment.

They will meet at least once a year and advise the Organising Committee on sustainability matters.

Beijing 2022 is promising to "set a new standard in utilising the Olympic influence to boost sustainability".

"The Olympics' impact is huge and profound, and we should take advantage of the opportunity to make the skies clearer, land greener and water cleaner," Zhang said at the time.