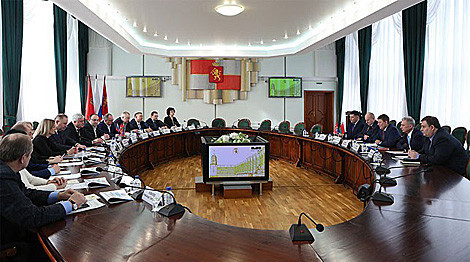 A delegation from Minsk has visited Krasnoyarsk to study their experience of hosting the 2019 Winter Universiade here, with the Belarusian capital holding the European Games this summer.

The delegation from Minsk City Hall was headed by vice mayor Alexander Krepak, as reported by BelTA.

They met with Universiade officials and attended several events in the Russian city.

"They have met with Krasnoyarsk officials who are responsible for transport, catering, accommodation of guests and athletes, and security," said the press service of the Belarusian Embassy in Russia.

"The delegation has also attended several competitions of the Universiade."

The Belarusian delegation also met with Krasnoyarsk Mayor Sergei Yeremin and discussed the possibility of signing a twin-town agreement.

"The Minsk city representatives also noted that Minsk manufacturers are ready to participate in projects to upgrade the passenger vehicle fleet of Krasnoyarsk," the press service added.

The Winter Universiade ends tomorrow in Krasnoyarsk with the gold medal match in the men's ice hockey and Closing Ceremony.

Meanwhile, preparations for the European Games are well underway, with Minsk hosting the event from June 21 to June 30.

Organisers claim that more than 40 per cent of tickets have been sold.