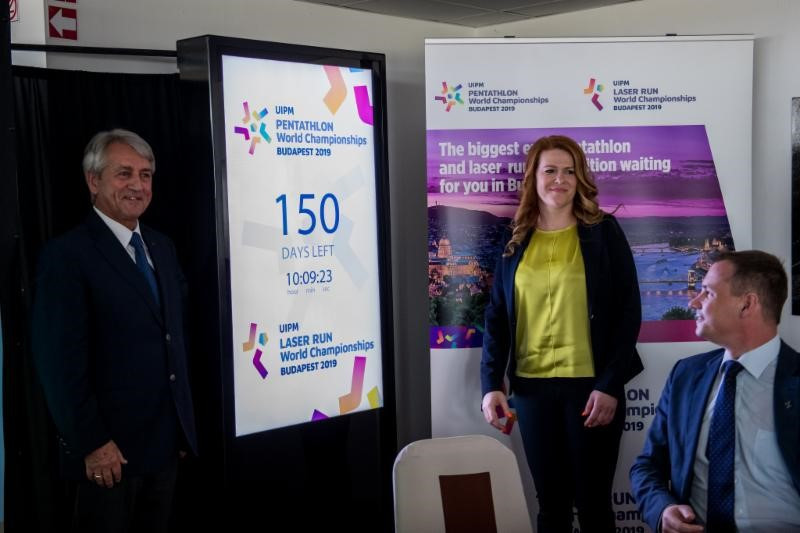 Schormann and Zsuzsanna Vörös, the women’s individual gold medallist at the Athens 2004 Olympic Games and a three-time individual world champion, revealed a countdown timer which will track the number of days until two UIPM World Championships link up for the first time in the Hungarian capital.

"I am happy to be here to mark 150 days until Budapest 2019, which I am certain will be a very special UIPM World Championships," Schormann said.

"Hungary is one of the pillars of our sport, in times past and in the present, and it is wonderful to see so many champions here today as we look forward to a competition that will bring our two worlds of pentathlon and laser-run together for the first time.

"Budapest hosted the Pentathlon World Championships in the last year of four decades – 1969, 1979, 1989 and 1999 – and we look forward to returning to the venue of Kincsem Park, which hosted an excellent competition in 1989.

"Here we will see the temporary construction of the second Pentathlon Stadium, where all five disciplines of our historic Olympic sport can be seen from one seat, with one ticket, in the space of five hours.

"This is our vision for the Tokyo 2020 Olympic Summer Games and we were proud to experience this facility for the first time in Mexico City during the UIPM 2018 Pentathlon World Championships.

"I can assure spectators, media representatives and sponsors that they will have a wonderful experience here in Budapest in September, where we will have a festival of UIPM sports."

The UIPM Pentathlon World Championships are due to run from September 2 to 8, with the mixed relay coinciding with the second Pierre de Coubertin Pentathlon Day – a global celebration of the legacy of the founder of Modern Pentathlon – on the final day.

"The HOC will provide a high level of support for the Local Organising Committee (LOC) with all emerging issues."

Sárfalvi added: "One of the main targets of the State-Secretariat has been to host more and more international sport events.

"This year will be extraordinary with the number of major sporting competitions in Hungary and all possible support will be provided to the LOC of the UIPM 2019 Pentathlon and Laser-Run World Championships."

Not only will Budapest stage the double UIPM showpiece in September 2019, the city has also recently been confirmed as host of the inaugural World Urban Games, in which laser-run will be a showcase sport.

The UIPM competition season is scheduled to resume next week with a World Cup in Bulgaria's capital Sofia.