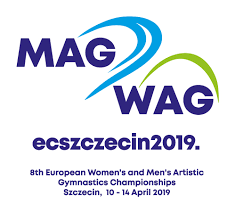 The eighth edition of the European Artistic Gymnastics Individual Championships are scheduled to begin tomorrow in Polish city Szczecin, where the sport’s last qualification places for the 2019 European Games in Minsk are up for grabs.

Last year, the six best teams qualified two non-nominative places for Minsk 2019, due to be held from June 21 to 30.

There is a maximum of three athletes per National Olympic Committee.

Any country that qualifies more than three athletes can choose which of the qualifiers to send.

More than 150 male and 100 female gymnasts from 38 and 36 countries respectively are set to compete at Szczecin’s Netto Arena through to Sunday (April 14).

Also competing will be Russia’s Angelina Melnikova, winner of the floor exercise crown in 2017 and three medals, including team gold, at Glasgow 2018.

Team-mate Maria Paseka, a vault specialist and former European and world champion, is returning to competition after having back surgery in December 2017.

The Netherlands’ Eythora Thorsdottir is back again too, looking to build on her success at Cluj-Napoca 2017 where she claimed two medals, as is France’s Coline Devillard, victorious on vault two years ago.

Among the other first-year seniors looking to make a name for themselves are Anastasia Bachynska of Ukraine, Amelie Morgan of Britain and Emma Slevin of Ireland.

On the men’s side, Ukraine’s Oleg Verniaiev, the 2015 and 2017 European all-around champion, is coming back from surgery having been added last-minute to the team to compete on pommel horse and parallel bars.

Also present will be the reigning world all-around champion Artur Dalaloyan and his Russian team-mate Nikita Nagornyy, a recent winner of six out of the seven available individual national titles.

Among the other big names fighting for glory is three-time world and former Olympic champion on horizontal bar, Epke Zonderland of The Netherlands.

He will be joined by the likes of Switzerland's Oliver Hegi, the 2018 European horizontal bar champion, as well as defending floor exercise champion Dominick Cunningham and his British team-mates Max Whitlock, the double Olympic champion, and rings master Courtney Tulloch.

The home crowd are likely to be resting their hopes on Marta Pihan-Kulesza and her husband Roman Kulesza, who live and train in Szczecin.

This is an individual championships for seniors only, so no team competition will be held.

The top 24 gymnasts after qualification, with a limit of two per country, advance to the all-around finals on Friday (April 12).

The best eight per apparatus qualify for the event finals, again with a limit of two gymnasts per country per apparatus.