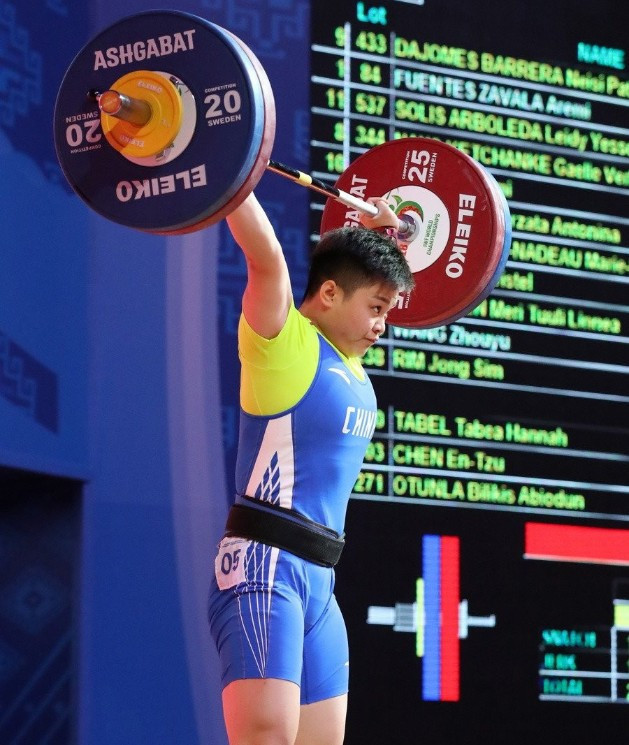 She also claimed gold in the snatch and clean and jerk with respective lifts of 125kg and 115kg.

Kazakhstan's Larisa Kobeleva clinched silver in the snatch with a best attempt of 115kg, 1kg more than bronze medallist Kim.

The North Korean also took bronze in the clean and jerk behind Ao, who lifted 152kg to finish second.

There was further success for the Chinese team as Yang Zhe secured two of the three available gold medals in the men's 109kg division.

The bronze medal went to Iran's Ali Hashemi on 405kg.

Yang beat the Uzbek by 7kg to win the snatch competition after he posted a best of 192kg, while South Korea's Jeong Ki-sam did enough for bronze.

Hashemi topped the podium in the clean and jerk having lifted 225kg, the same amount registered by Djuraev, who lost out by virtue of his higher bodyweight.

Kang Youn-hee of South Korea upset the rest of the field in the women's 81kg, taking gold in the overall and clean and jerk.

Kang's clean and jerk of 123kg was 9kg more than Turkmenistan's Aýsoltan Toýçyýewa could muster, while Mongolia's Mönkhjantsangiin Ankhtsetseg was the recipient of the bronze medal.

The South Korean snatched 97kg to end on an overall 220kg, beating Ankhtsetseg by 14kg.

Meshitkhanova was crowned winner of the snatch event having hoisted 98kg, 1kg ahead of Kang and 5kg more than Ankhtsetseg.