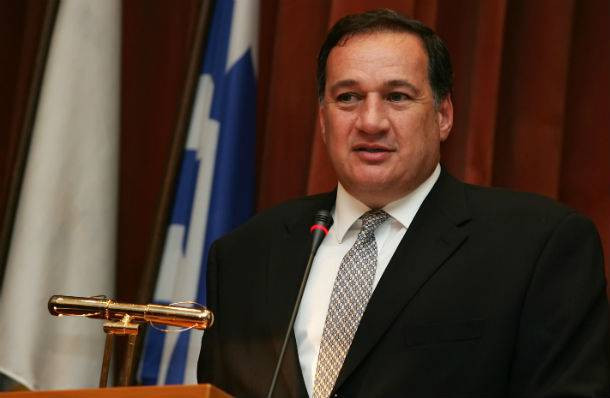 Greece's absence on the International Olympic Committee (IOC) is set to end with Spyros Capralos being proposed for election as a member here today.

Greece has been without an IOC member since 2015 when Lambis Nikolaou reached the age limit of 80 having been represented continuously since its formation since 1894, including having the founding President, Demetrius Vikelas.

Capralos, a former water polo player, who represented Greece at the 1980 and 1984 Olympic Games in Moscow and Los Angeles respectively, has been President of the Hellenic Olympic Committee (HOC) since 2009.

He is one of 10 candidates proposed by the IOC Members Election Commission, chaired by Great Britain's Princess Royal, for election at the organisation's Session here between June 24 and 26.

The selection of Capralos as a member coincided with the announcement today that Athens will host the IOC Session in Athens in 2021.

The IOC's choice of Capralos is not without controversy, however, as seven years ago he was linked to black market ticket sales for the 2012 Olympic Games in London.

Capralos allegedly told undercover Sunday Times reporters that he could get more tickets for them to distribute as it wanted.

Following an investigation, he was heavily criticised by the IOC Ethics Commission and given a warning.

"This is seven years behind us.

"Both the IOC Members Election Commission and Ethics Commission came to the conclusion that, after seven years, he's served his sanction.

Others put forward include Algeria's Mustapha Berraf, President of the Association of National Olympic Committees of Africa, and Narinder Batra, head of the Indian Olympic Association.

Batra is also President of the International Hockey Federation.

The memberships of Berraf, Batra and Lee will all be linked to their positions and they will cease to be part of the IOC if they lose their posts.

Capralos is being proposed as an "individual member", meaning he will continue to be an IOC member even if he ceases to be HOC President, although at 64 his time will be limited until he reaches the mandatory age limit of 70.

Chinchilla and Thiam are also proposed for individual membership.

They are set to be joined by Indonesian businessman Erick Thohir.

The 48-year-old is President of the Indonesian Olympic Committee and former owner of Serie A football club Inter Milan.

Thiam is one of four candidates from Africa being put forward.

Moiloa-Ramoqopo is 51 and President of the Lesotho National Olympic Committee.

The 53-year-old Fortes is President of the Cape Verdean Olympic Committee.

It will take the total number of IOC members to 105.

"IOC members are representatives of the IOC in their respective countries, where they promote Olympism and its values," Bach said.

"These 10 new members proposed to the IOC Session have different backgrounds, but they all have a great passion for and knowledge of the Olympic and sports movement, which will help their mission and will be beneficial for the entire Olympic Movement."

In addition to the 10 new IOC members, they also proposed the re-election of Argentina's Gerardo Werthein and to extend the terms of office of three members due to reach the age limit of 70.

They are led by Australia's John Coates until the end of 2024 "due to his important role as chair of the [IOC] Legal Affairs Commission".

It is also proposed that the term of Turkey's Uğur Erdener is extended until 2024 "due his important role as chair of the [IOC] Medical and Scientific Commission and, in particular, with regard to his important role as representative of the Olympic Movement in the World Anti-Doping Agency".

The third member to receive an extension is Senegal's Mamadou Ndiaye until 2023 as long as he continues to be the President of the Senegal National Olympic & Sports Committee to help with preparations for the 2022 Summer Youth Olympic Games in Dakar.

Finally, the IOC Executive Board proposed as IOC Honorary members several members due to finish their term of office at the end of 2019 because of the age limit.

Also proposed is North Korea's Ung Chang, who reached the age limit at the end of last year but was not eligible as he did not attend the IOC Session in Buenos Aires.