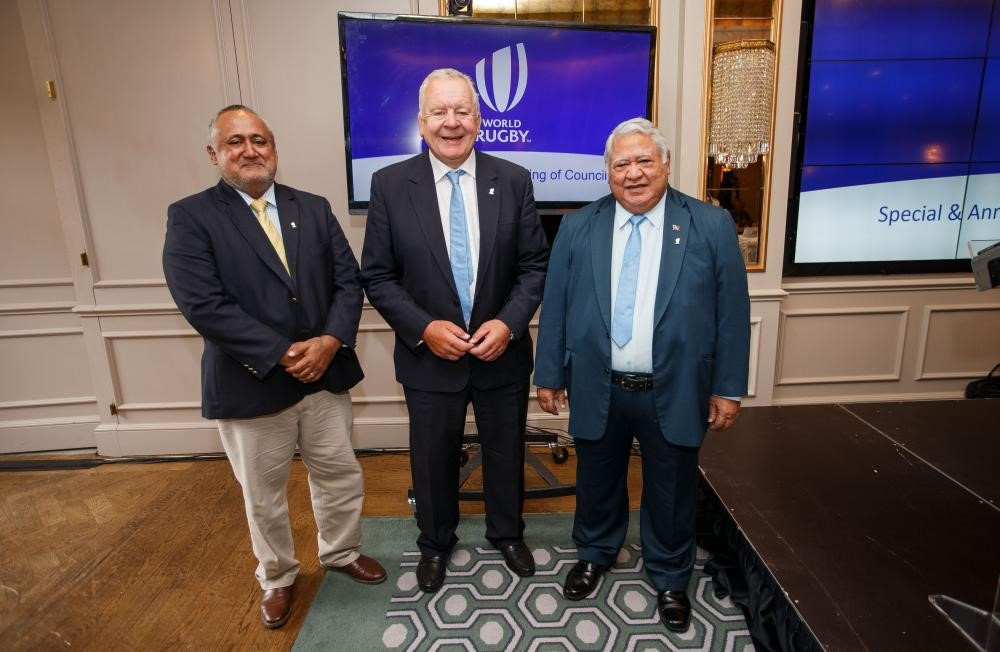 Fiji and Samoa have participated in their first World Rugby Council meeting in Dublin following confirmation of their admission last year.

The Pacific Island nations were announced as members of the Council in November as part of a new governance model, having both achieved the required good governance criteria as stipulated within the bye-laws of World Rugby in line with governance reform launched in November 2015.

Fiji and Samoa followed Georgia, Romania and the United States onto the expanded Council which now has 51 members.

"This is an historic day for World Rugby and the Pacific Islands, and a reflection of the importance and success of the transformational governance reforms made by this organisation and the unions," Sir Bill Beaumont, the World Rugby chairman, said.

"We are delighted to be welcoming Fiji and Samoa to Council, two unions who have contributed so much to the game.

"The Pacific Islands are unique, immersed in rugby heritage, and I know that the unions will bring excellent insights and make strong contributions on Council.

"This shows that the model is in place, the pathway is in place and the door is open to other unions who aspire to have a seat on Council.

"We encourage all unions to take inspiration from Fiji and Samoa, review their governance and strive to achieve the required criteria.

"World Rugby is committed to the sustainable growth of the sport set against a backdrop of strong governance, and we will continue to work with our unions to ensure that they have all the support to achieve and maintain the necessary criteria."

Sir Bill welcomed both Francis Kean and the Prime Minister Tuilaepa Malielegaoi, the Council members of Fiji and Samoa respectively, to the meeting.

"This is a significant moment for Fiji rugby and all those who have worked towards this objective, implementing new structures and governance pathways," said Kean.

"We look forward to working with World Rugby and the Council to further our contribution to the global game in the board room."

Malielegaoi added "The World Rugby Council is a very important place to be - it is where decisions are made on the future of the sport and Samoa is very excited to be here.

"We've played an active role in participating in international rugby competitions across the world - from 15s to sevens - despite being a very small country with a small player pool so for us to be here at this meeting, and to unite with World Rugby on their vision to grow the sport, is an incredible learning experience."

World Rugby also revealed that following governance reforms to promote gender balance and opportunity, a total of 17 of the 51 Council members are occupied by women.

The "historic high" came as World Rugby launched their global campaign for women in rugby titled "Try and Stop Us".

The strategy is aimed at driving gender equality across the sport.

The Council also approved the recommendation of the Executive and Regional Committees to accept Algeria as an associate member of World Rugby having met the required criteria.

An application from the Algerian Rugby Federation was initially lodged in 2016.

"We have worked hard to achieve this goal and I would like to thank Rugby Africa, who guided us, all the volunteers, educators, rugby club presidents, the national team players and staff, not to mention our private partners who believed in us from day one and of course our Board," said Abdelkader Sofian Ben Hassen, the President of Algerian Rugby Federation.

"And I thank our Minister of Sports for his trust and for allowing us to enter this great sport’s forum and the National Olympic Committee of Algeria for its exceptional support.

"Thank you all, we are on our way for new rugby adventures."

It takes the total of countries to 124 who are now members of World Rugby.