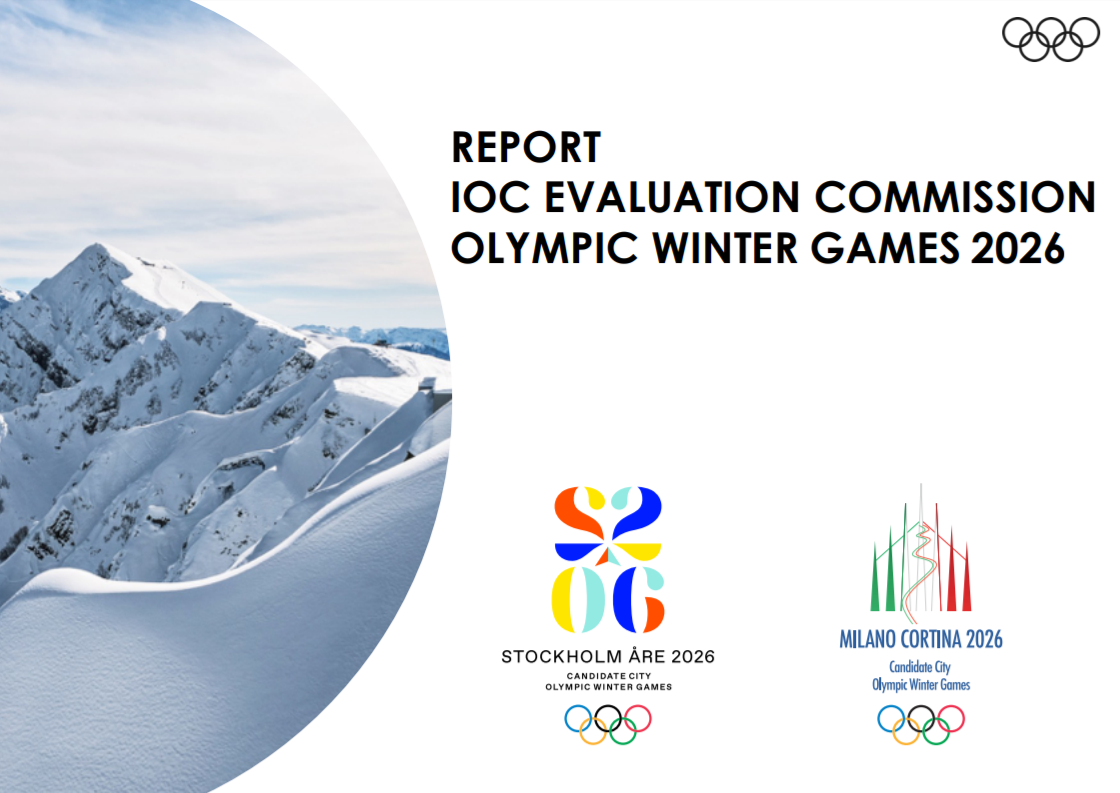 The International Olympic Committee (IOC) has today released the report by its Evaluation Commission for the 2026 Winter Olympic and Paralympic Games, providing a thorough assessment of the two candidates – Stockholm Åre and Milan Cortina.

Following working visits earlier this year, the Evaluation Commission report, which can be viewed by clicking here, analyses the candidature files and additional documentation submitted and will serve as a guide for the IOC members before they vote on June 24 at the 134th IOC Session in Lausanne.

In terms of the latest opinion polls conducted by the IOC in March 2019, Milan Cortina would appear the frontrunner.

The Evaluation Commission says the level of public support for the candidature has been consistently high, with its opinion poll finding 83 per cent support in Italy, 87 per cent in Milan, 81 per cent in Lombardy and 80 per cent in Veneto.

The opinion poll for Stockholm Åre showed support is on the rise but is still considerably lower, with 55 per cent in favour in Sweden, 54 per cent in Stockholm and 59 per cent in Jämtland, where Åre is located.

Stockholm Åre 2026 has pointed out that as the candidature process has continued, opposition has decreased, with just 17 per cent of residents now against the bid.

Criticisms aimed at the bid include a failure to submit binding venue funding guarantees for the new venues – the Stockholm Olympic Village, the speed skating oval and the cross-country and biathlon venue – despite letters of intent having been provided.

It is also stated that Stockholm is not a signatory of the Host City Contract (HCC) and thus not an official host city.

"The Municipality of Åre is proposed as the signatory of the Host City Contract, along with the Swedish NOC (National Olympic Committee)." the Evaluation Commission report reads.

"The Municipality of Stockholm has stated that it would not sign the HCC.

"The City of Stockholm would rent out the sports facilities necessary for the Games and 'provide its public services at the same level and at the same conditions as any other event within the city’s boundaries'.

"Having only Åre as a signatory of the HCC, without Stockholm, will require strong financial support from private guarantors to ensure fulfilment of the contractual requirements and delivery of the Games.

"Whilst open to fully private Games, the Commission believes that the model envisaged by the bid requires more detailed study."

Asked in a media call if the IOC is concerned that Stockholm is not an official host city, Evaluation Commission chair Octavian Morariu said: "I know it’s very important who signs the contracts but also, it may be more important, the back-up is for the guarantees that are behind the arrangements and the agreements, and this is really what matters.

"If we go back to Pyeongchang [2018] for example, the contract was not signed by the city of Pyeongchang but by the region."

"That’s the way it’s been for quite a long time and that’s been the case since the end of last year, so nothing new and we are confident with that set up," he said in a separate media call.

"We have chosen that status and it’s been done in collaboration and in our great partnership with the IOC because given the political situation we had in Stockholm during the fall, it was a centre-left coalition forming so to be safe, we moved forward with that option and that has worked very well, so we’re happy with that."

"The report is not here to judge, it’s just here to present.

"So, having said that, our duty is to fully reflect the two offers and in the final presentation to the IOC Session make sure that all this is very well understood by the members for a very useful vote.

"The members, no worries, will also seek clarification in the Session."

Unlike Stockholm Åre 2026, it is claimed in the report that Milan-Cortina 2026 meets all the criteria in terms of the key elements for any successful Games, including a clear vision aligned with existing long-term development goals, a solid venue masterplan, firm support from all sectors of society and the best possible athlete experience.

Should Milan-Cortina be awarded the Games, Italy intends to enact a 2026 Olympic Law – as was the case for the Turin 2006 Winter Olympics – by the end of 2019.

This law would create an Olympic board comprising members of the Organising Committee and other stakeholders, as well as a separate public legal entity to manage Games-related venue and infrastructure works.

"Certain guarantees, including financial, will be put into effect though the enactment of appropriate legislation, such as the Olympic Law," the Evaluation Commission report says.

"The Olympic Law will ensure that the tax-related requirements of the Host City Contract are fulfilled."

Responding to release of the Evaluation Commission report, Brisius said it was the strongest validation yet of the Bidding Committee's pledge to make the Winter Olympics and Paralympics more sustainable, more affordable and more accessible for more cities and communities than ever.

"Stockholm Åre 2026 will head to the IOC Session in Lausanne with confidence that our bid is tailor made for the new reality of staging a truly 21st Century Winter Games," he said.

"Winter sports are in Swedes' DNA, they are part of the fabric of our cities and our communities.

"That’s why we already have so many state-of-the-art venues that are full of Swedish fans every week of the winter season.

"Combine that passion with our Winter Games concept that puts 85 per cent of athletes in just two locations, Stockholm and Åre, and we can promise the most magical experience for athletes and fans."

The vision of the Stockholm Åre 2026 candidature is based on achieving five main goals, including delivering a magical "Made in Sweden" Winter Games experience for all.

"'Made in Sweden' is a promise, not just a slogan," IOC Executive Board member and SOK secretary general Gunilla Lindberg said.

"It is Stockholm Åre 2026’s promise of the quality the Olympic Movement needs, from partners they can trust.

"We are grateful for the IOC Evaluation Commission’s thoughtful, constructive feedback in today’s report and throughout this collaborative and enriching candidature process.

The IOC claims both candidates have fully embraced the Olympic Agenda 2020 reforms.

"They have fully embedded the Olympic Agenda 2020 philosophy, and have athletes at the centre of their plans.

"The two candidates have aligned their concepts with their context and local long-term goals.

"All of this led to massive cost savings and a more sustainable hosting model that is the new reality for the Games."

The 2026 candidates plan to use on average over 80 per cent existing or temporary venues, compared to 60 per cent for the 2018 and 2022 candidates.

As a consequence, their proposed Games operating budgets are said to be on average 20 per cent lower than those of the candidates for the 2018 and 2022 Winter Olympics.

The IOC claims the 2026 candidature process has been built on greater partnership, flexibility and sharing of knowledge.

"As part of the new process, the IOC provided increased technical services to each interested city, while lowering the number of candidate city deliverables and presentations.

"More than 20 Olympic Games experts supported the cities in the development of their Games concepts, through the provision of over 30 on-site individual services, including several workshops.

"The result is a significant cost reduction in the candidature budgets, which are projected to be over 75 per cent lower than the average budgets for the 2018 and 2022 candidates.

"The candidate cities 2026 have publicly expressed their appreciation for the new reforms, and cited them as a major factor in their decision to apply to host the Games."

The candidates have the right of response to the report.

Any additional information received by the Evaluation Commission will be shared with the IOC members prior to the election.

On June 24, the IOC membership will have the opportunity to hear from the Evaluation Commission and the candidates, which will include detailed question-and-answer sessions during a technical briefing in the morning.

In the afternoon, the candidates will make a final presentation during the 134th IOC Session, before the vote and the host city announcement.