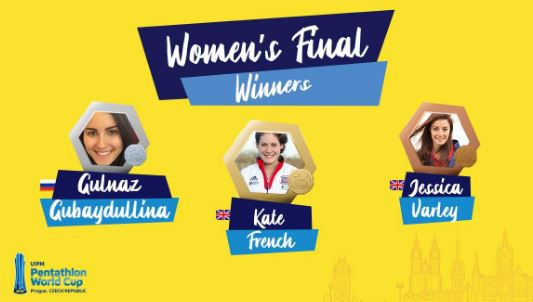 The 27-year-old world number eight, who had topped qualifying, held off the challenge of Russia's 2017 individual world champion Gulnaz Gubaydullina to claim the third World Cup win of her career in what was the fourth event in this year's series.

French set up her win by winning the fencing discipline following a strong swim and was never headed thereafter.

She finished the concluding laser run 14 seconds clear of her Russian rival.

Bronze went to Varley, making her first appearance on a World Cup podium.

An excellent laser run lifted the 24-year-old into the medals ahead of South Korea's Kim Sun-woo.

“I’m absolutely over the moon," she said.

"I’ve been working for this basically my whole life and I am so excited it has finally happened."

Gubaydullina told UIPM: “I am very happy – all my disciplines were very good today.

"It’s a lot of work and I’m looking forward to the Olympic Games and the World Championships.”

It was a timely win for French, European silver medallist and fifth-placed at the Rio 2016 Games, as qualifying for Tokyo 2020 opens in a week.

"The first two competitions of the season didn’t quite go to plan for me so I needed a good result," she told Pentathlon GB.

"I’m super happy that I pulled everything together today, it’s been a good day all around and I’m obviously delighted to end it by taking victory."