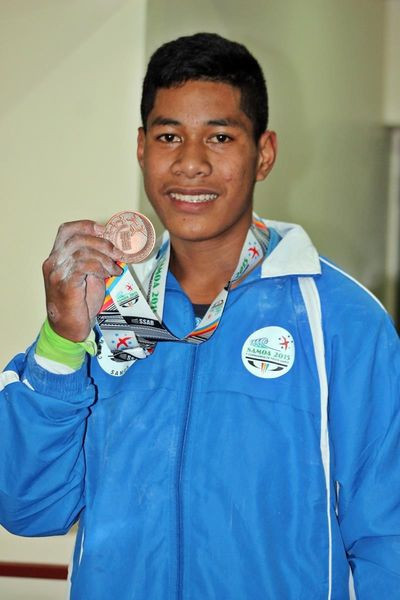 The cheers rang out at the FMF Gymnasium in Suva when Don Opeloge made his final lift for a sensational "home" victory in the International Weightlifting Federation (IWF) Junior World Championships.

Fiji is the first Pacific nation to host any IWF World Championships, and although the Fijians have no medal contenders Opeloge won gold not just for Samoa, but for Oceania.

Opeloge, 20, is from a famous weightlifting family - there are seven Opeloges on the IWF results database and his aunt, Ele, was the first Oceania lifter to win an Olympic Games medal when she was promoted, after doping disqualifications, to silver at Beijing 2008.

He failed with his first two snatches and trailed in sixth place at halfway, but Opeloge made all his clean and jerks and won the 89 kilograms by making his last two lifts when everybody else had finished.

He was second at 85kg in the Commonwealth Games last year and has been rewarded for years of hard work under coach Jerry Wallwork.

Mohammad Hosseini of Iran was second on 348kg, a kilogram behind Opeloge, with the Pole Bartolomej Adamus third.

China will fly home from Suva with a 100 per cent record in the women’s events after Liao Guifang became their fourth winner in three days.

The Championships run are due to run until Saturday (June 8), when China’s sensational super-heavyweight Li Wenwen was expected to win gold, but it reduced its team to four women and three men shortly before the start last weekend.

All four women went home with gold, though none of the men was on the podium.

One of the four women had not competed internationally since 2016, and two were last seen in 2017.

The Chinese star of the moment, super-heavyweight Li, was omitted from the team; whether that was because of injury or a tactical decision is not known.

It means the teenager who has finished ahead of the senior world and Olympic champions, and set a senior world record, in her first and only two appearances in international competition has still never lifted outside China.

The first three Chinese winners were Zhao at 49kg, Gan Hongyan at 55kg, and Luo Xiaomin at 59kg.

Liao completed the set in the 64kg today, winning comfortably on 230kg ahead of two former youth world champions, Angie Dajomes of Ecuador and Nuray Levent of Turkey.

Levent made a career-best total of 213kg, and has on her own competed in more IWF Junior World Championships than the entire China team, but still she was beaten by 17kg.

If that shows how tough it is for the women, at least China’s men gave the rest of the world a chance.

Every one of the women’s winners has been Asian, four Chinese and a Vietnamese, while only Uzbekistan has won a men’s title for Asia.

Europe had its third winner of the week when Ritvars Suharevs of Latvia overcame a sluggish start in the snatch to win the 81kg.

The Pan-American junior champion Juan Solis, of Colombia, was one kilogram behind after the snatch and failed with his final clean and jerk to finish second.

Suharevs, who won last year’s Junior world title, made 156kg-195kg-351kg and said: "I am disappointed in the Snatch because I am better than that, my best result is 162kg.

Suharevs, 20, was already in the top 10 in Olympic qualifying and this victory will move him up the rankings.