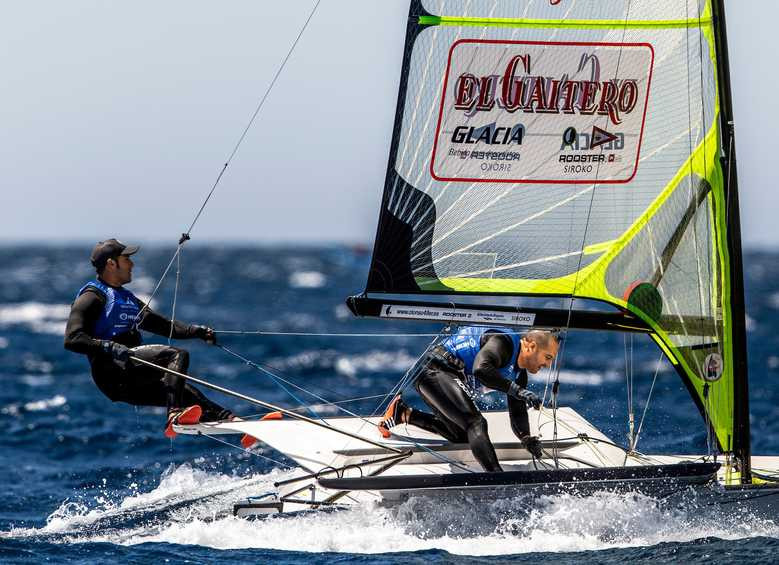 Winds gusting well in excess of 30 knots made things tough to the point of perilous for sailors racing on day two of the Hempel World Cup Series Final in Marseille, before competition was brought to an early close.

Only a small number of races for the sailors from 41 nations racing across the 10 Olympic events and open kiteboarding were completed as the wind speed was deemed unsafe for competition.

The 49er boats completed a single race in a breeze that started at 20 knots and quickly rose to 25 knots with stronger gusts.

Of the 14 boats in the fleet, only four of them completed the race with capsizes aplenty.

Federico and Arturo Alonso, brothers from Spain, claimed the win and are now one point off the leaders, Kévin Fischer and Yann Jauvin of France, who who finished second.

"I think it was really close to the limit for the 49er class.” Federico told World Sailing.

"It was really difficult for us but it is part of the game and everyone had to deal with it.

“We had some scary moments."

The French lead on five points, followed by the Spaniards on six.

Nico Parlier won three of his four races in the open kiteboarding and has opened up a six-point lead over compatriots Theo de Ramecourt and Axel Mazella.

The 24-boat Nacra 17 fleet was able to sail two races – both won by Italy's Vittorio Bissaro and Maelle Frascari.

Experienced crews in the women's 470 shone in their single race.

Afrodite Zegers and Lobke Berkhout of the Netherlands  a two-times Olympic medallist and five-times world champion, took the victory and move up into first overall.

Men's 470 sailors Mat Belcher and Will Ryan of Australia have always thrived in strong winds and they took the sole men's 470 race win to move into second overall.

The laser and laser radial fleets both completed one race apiece.

Greece's Adonis Bougioris won the Laser race and is fifth overall, four points off Ryan Lo of Singapore, who holds the lead.

No racing was possible in the 49erFX, finn and the men's and women's RSX.

Thursday's forecast is looking more favourable for the competitors.