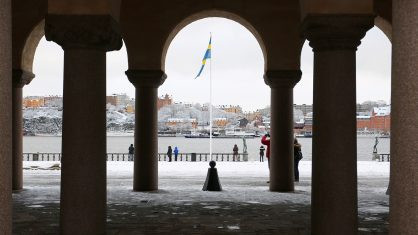 The Bidding Committee's vision is for Sweden’s first Winter Games – and all future Games – to contribute to a stronger, better and more sustainable world.

This vision is underpinned by what Stockholm Åre 2026 describes as Sweden’s proven track record in environmental performance, sustainability and green living.

Sweden already has among the world’s most ambitious climate targets, aiming to cut emissions by 70 per cent by 2030 and reach full climate neutrality by 2045.

It is claimed that national culture of sustainability was in evidence in Åre earlier this year, when it hosted the first fossil fuel-free International Ski Federation Alpine World Ski Championships.

But the bid has already developed concrete proposals with one example being that any flights the would-be Organising Committee charters between Games venues in Stockholm, Åre and Latvia's capital Riga will be double compensated at gold standard level for greenhouse gas emissions.

It is stated that this will ensure the use of predominantly existing facilities yields maximum benefit and that overall, any unavoidable carbon dioxide emissions will be offset by a minimum of 115 per cent.

"Climate change is our planet’s most important challenge, so 'neutrality' is not enough: Stockholm Åre 2026 is committed to climate-positive Games.

"Sweden and the Olympic Movement can be the perfect partners in achieving this bold objective."

Stockholm Åre 2026 has set a target of zero per cent waste and 100 per cent reuse or recycling across the life of the would-be Organising Committee.

The Winter Olympics and Paralympics would aim to make maximum use of emerging technologies in green building and overlay materials, and in low-carbon and electric vehicles, integrating new innovations as they become available in Sweden’s sustainability economy.

"There are huge possibilities in the dream of the Olympic and Paralympic Games that can boost energy in the region to start new ambitious cooperation, set new targets and speed up the pace in finding solutions," she said.

"2026 could be the year when the Stockholm region proves to the world that is has taken huge steps towards the global 2030 Sustainable Development Goals, and that this is the result of a joint effort from the whole society in the spirit of the Olympic Movement."

Stockholm Åre is in a two-horse race with Milan Cortina for the 2026 Winter Olympics and Paralympics.

The report analysed the candidature files and additional documentation submitted and is supposed to serve as a guide for the IOC members before they vote on June 24 at the 134th IOC Session in Lausanne.