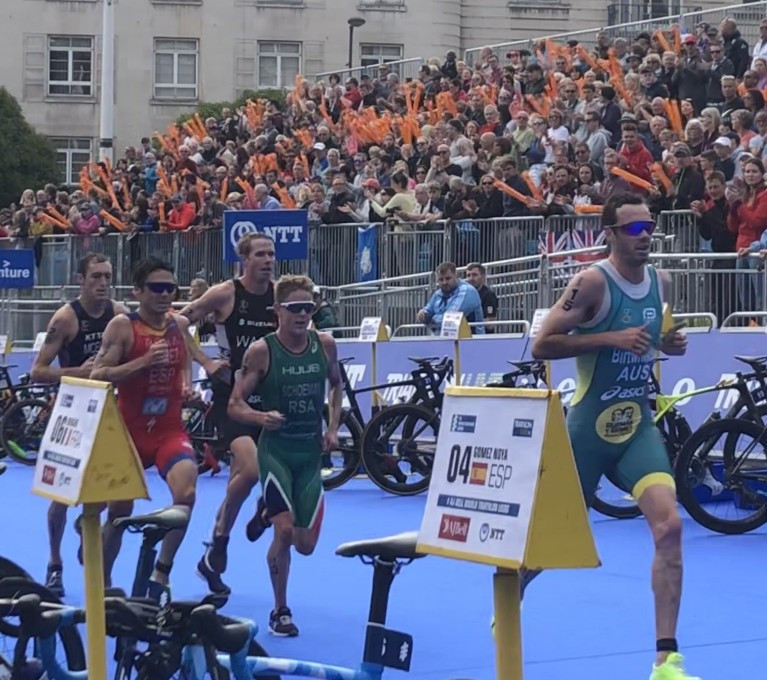 A former under-23 world champion, Australian Birtwhistle pulled away on the final leg of the run to earn his first World Series win.

Alistair Brownlee had been expected to duel with brother Jonny for victory but he finished well down the field and appeared to have suffered a back injury.

Jonny Brownlee also failed to crack the top 30 and it was left to Birtwhistle to take the acclaim in one hour 44 minutes 12 seconds.

Matthew McElroy of the United States finished second for his first podium of the WTS, while veteran Spaniard Javier Gomez was third.

South Africa's Henri Schoeman made an early break on the second lap of the run, but was reined in and had to settle for fourth, 18 seconds behind Birtwhistle.

Jonas Schomburg of Germany, who had led after the cycle and the first running lap, ended up 10th, while the best British finisher was Thomas Bishop in 13th.

There was delight for the British supporters, however, when Georgia Taylor-Brown claimed a stunning victory on home ground in Leeds to end Katie Zaferes' 100 per cent record in the women's series.

For Zeferes, it marks an improvement on last season when she finished third in Leeds and she keeps a comfortable margin from second-place Jessica Learmonth at the top of the overall standings.

There was plenty for the Yorkshire crowd to cheer with Taylor-Brown the first among five Britons to finish in the top 10 – Learmonth was third, with Non Stanford fifth, 2018 Leeds winner Vicky Holland seventh and Sophie Coldwell ninth.

Learmonth led out of the swimming in a pack that also featured Coldwell, Zeferes and American Taylor Spivey – who eventually came fourth – with Taylor-Brown 12 seconds back.

However, Taylor-Brown made up the gap on the bike leg and at the start of the run was one of the six-strong leading group, alongside Zaferes, Learmonth, Coldwell, Spivey and Brazil's Vittoria Lopes.

It was on foot that Taylor-Brown really shone as she and Zaferes left the rest in the dust.

The Briton was 15 seconds ahead of the American heading into the final running lap and managed to hold off her more heralded opponent to claim an impressive victory.