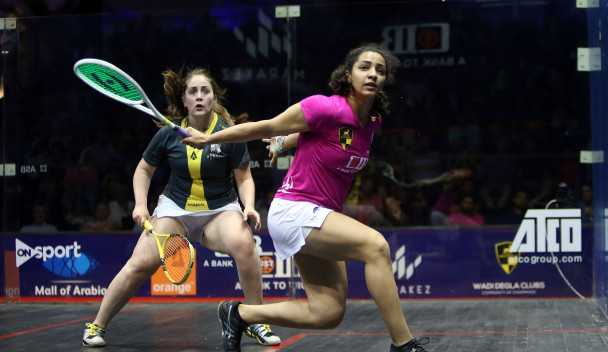 World number one Raneem El Welily of Egypt got her Professional Squash Association World Tour Finals campaign off to the perfect start as she beat Tesni Evans of Wales in Cairo.

El Welily recorded a comfortable 11-4, 11-6 victory in just 18 minutes in the Group A contest at Cairo’s Mall of Arabia.

"You practice on the court a lot, but every day the conditions are different," the Egyptian said.

"Obviously, the weather is really hot, we practiced this morning at 11am and the ball was bouncing high up and it’s very different to what we have played on today, but definitely a situation that you can adjust to."

In the other match in Group A, Camille Serme of France came from two match balls down to defeat New Zealand’s Joelle King.

Defending champion Nour El Sherbini was beaten in her opening match as she lost 11-8, 11-9 to England's Sarah-Jane Perry.

In the men's tournament, defending champion Mohamed Elshorbagy of Egypt also began with a win as he overcame Peru's Diego Elias in a thrilling Group B encounter.

"We both had a lot of match balls," the 28-year-old Egyptian said.

"Matches like this, every time we play each other it always goes down to the wire.

"He’s a great player and I always say that he is going to beat us all one day and I’m going to try and make it as late as possible, but one day he is a future world number one and future world champion."