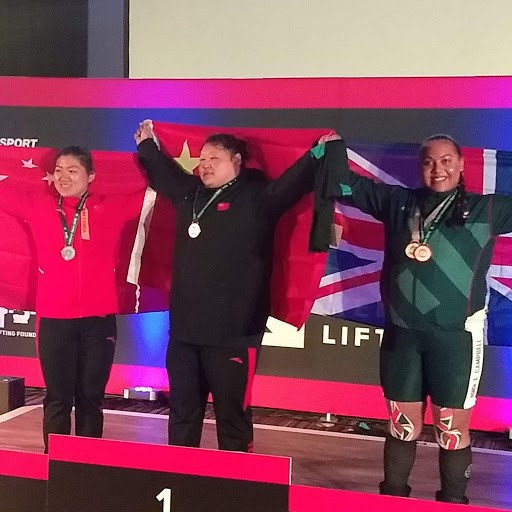 The more impressive was former world champion Kang Yue’s victory in the 87kg category, in which she made 268kg to finish clear of the American Jules Riotto by 42kg.

Kang was second, second and first in successive IWF World Championships from 2013 to 2015, but was not seen in international competition again until this year, when she won at 81kg in the EGAT’s Cup in Thailand.

Kang’s victory means the three highest totals in the 81kg category in Olympic qualifying have all been set by Chinese lifters – Wang Zhouyou, Ao Hui and Kang.

In the super-heavyweights, Emily Campbell, one of Britain’s top hopes for Olympic qualification, missed three of her six lifts, including a national record attempt.

“It didn’t quite go to plan, but I’m happy with the result,” said Campbell, who totalled 255kg.

She was 1kg behind runner-up Weipeng Jia and 45kg behind the giant winner Xiaoman Zhou, who weighed in at 140kg.

Zhou did not start lifting until everybody else had finished – but she did not hang around once she started.

In the snatch Zhou made 135kg in quick time, returning to the stage within 30 seconds of her previous lift even when she had a two-minute clock.

She failed with two clean and jerks and finished on 300kg.

With Meng Suping and Li Wenwen well ahead of her in qualifying, Zhou is highly unlikely to be in Tokyo.

In the heaviest men’s categories there were impressive victories for the Ukrainian Dmytro Chumak, the 102kg European champion who lifted here at 109kg, and for Jiri Orsag, who beat his Czech Republic team mate Kamil Kucera in the super-heavyweights, with Dutch teenager Enzo Kuworge third.

Because 17-year-old Kuworge had trained for only a week after suffering an elbow injury – which he felt again in competition – he was happy with his total of 370kg.

Chumak looked impressive in making 170-210-380, but missed his final snatch and clean and jerk.

There was a huge cheer from a large crowd for Owen Boxall, who made a 200kg clean and jerk in winning the British title.

His coach Andy Callard was honoured in the Queen’s Birthday Honours List with a British Empire Medal, awarded for “voluntary services to weightlifting”.