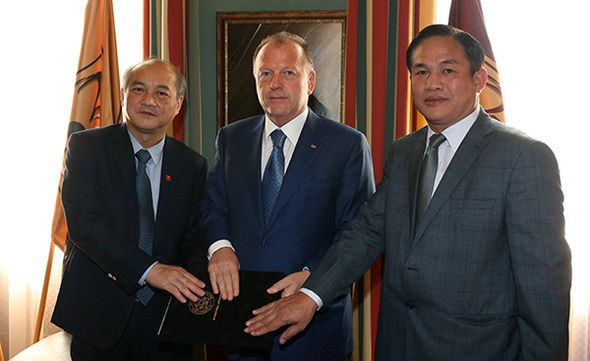 The International Judo Federation (IJF) has welcomed leaders from the Vietnam Judo Association (VJA) and the Vietnam Sports Administration (VSA) to its Presidential office in Budapest for the first time, with the world governing body signing two agreements with the Southeast Asian country.

The trio signed a Memorandum of Understanding to promote and develop judo in Vietnam and to support their national team to achieve high results at the Asian Championships, Olympic Games and on the IJF World Tour.

This will also include the IJF sending judo experts to the country.

The meeting also paved the way for Vietnam to develop their next generation of judoka as the parties signed a "Judo In Schools" agreement.

The IJF's educational programme is set to be introduced into 15 schools with the long-term aim of producing future national players and Olympic competitors for Vietnam.

As part of the proceedings, Vizer presented a Herend Porcelain figure of Kanō Jigorō, the founder of judo, to Vuong.

Vietnam sent one judoka to the last Summer Olympics in Rio de Janeiro in 2016.

Văn Ngọc Tú reached the round-of-16 in the women's under-48 kilograms division.