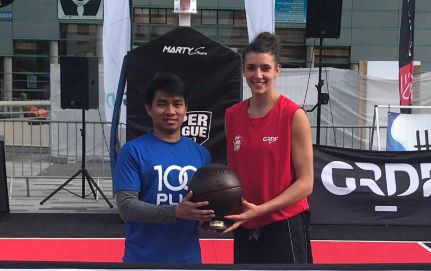 Laetitia Guapo starred for France as they thrashed hosts Italy 19-6 to win the second leg of the International Basketball Federation 3x3 Women's Series in Turin.

Guapo contributed nine points as her team finished unbeaten in the tournament.

The win will give the French confidence heading into the FIBA 3x3 World Cup which begins in Amsterdam in the Netherlands on Tuesday (June 18).

Torrential rain suspended play yesterday, leaving both France and Italy to complete their pool matches before the knockout stage could begin.

France topped their group with a 14-12 win against the United States as Guapo top-scored with seven points.

They booked their place in the final by defeating Canada for the second time in two days, running out 16-14 winners in the last four.

Canada reached the semi-finals after Michelle Plouffe scored 10 points in a 17-16 quarter-final win against Serbia.

World champions Italy got to the last four after seeing off Serbia to top their group.

Rae Lin D'alie made her mark for the Italians in the semi-finals, with seven points contributing to a 16-12 victory against the US.

Having lost to France in the Pool A decider, the United States recorded a crushing 21-6 win against Mongolia in the quarter-finals.