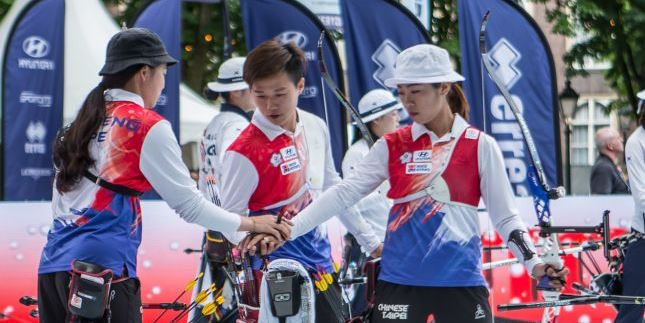 After waiting 20 years for a gold medal at the World Archery Championships, Chinese Taipei secured their second within 24 hours as they defeated South Korea 6-2 to win the women's recurve team title in 's-Hertogenbosch in the Netherlands.

Yesterday, Chen Yi-hsuan, Chen Li-ju and Huang I-jou were sharper with their arrows than their American rivals as they claimed the compound women's crown, the country's first title since winning gold in the same event in Riom, France, in 1999.

Lei Chien-ying, Tan Ya-ting and Peng Chia-mao, buoyed by their compatriots' efforts, were in command from the off against South Korea as they took a 4-0 lead today.

In the third set, the Koreans came back into the contest with none of their arrows dropping outside the nine but gold was sealed for Chinese Taipei when they edged the final set 55-54 to take a 6-2 victory.

“We worked very hard for a long time for this match and it was hard," said Lei.

"We had to concentrate and exchange information, especially on the wind as it was tricky.

“We did the best we could and we are now very happy.”

There was more golden glory for Chinese Taipei in the women's recurve final when Chien-ying upset world number one Kang Chae Young of South Korea to take the world championship title.

There was also a new champion in the men's event as China beat India to take their first recurve men’s team world title.

Wei Shaoxuan, Feng Hao and Ding Yiliang moved clear of India with 58 points from a possible 60 in the second set but had to wait until the fourth set to clinch a 6-2 victory.

The recurve mixed final was something of a mismatch as South Korea cruised to a 6-0 triumph against the Netherlands, with Italy defeating Chinese Taipei 5-3 to claim bronze.

A first World Championships medal was won by Bangladesh when Ruman Shana defeated Italy's Mauro Nespoli to seal the bronze medal in the men's individual recurve.

Ellison and Khairul Anuar Mohamad from Malaysia were forced into a shootoff after they had won a set apiece after drawing the opening three sets.

As Ellison pulled the perfect 10, Mohamad could only manage an eight and the American took gold.

The women's individual recurve title was won by