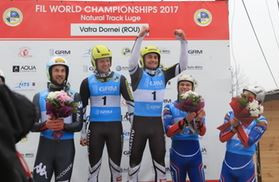 Austrian lugers Rupert Brüggler and Tobias Angerer have announced their retirement from the sport, according to the Austrian Toboggan Federation.

The duo, who won the double-seater World Championship title in Vatra Dornei, Romania, in 2017, had raced together since 2006.

Brüggler said: "At the moment I do not miss tobogganing.

"But I think that from October or November the tingling will come back and then probably a certain sadness."

Angerer has recently moved house and is preparing for marriage following the end of his luge career.

He said: "I have been with Lisa for eight years.

"I was excited last summer when I proposed marriage to her at the summit of the Grossglockner (Austria's highest mountain) – that was very romantic."

At the 2006 Turin Winter Olympics, Angerer won a bronze medal in the men's 15 kilometres classical interval start and silver in the 4x10 kilometres relay.

A year later he became the first winner of the Tour de Ski, finishing 46.4 seconds clear of Alexander Legkov of Russia.

Their final race was at February's World Cup Final in Umhausen.