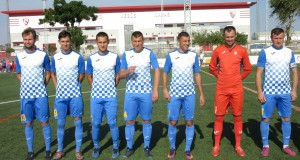 Defending champions Ukraine continued to make ominous progress at the International Federation of Cerebral Palsy Football World Cup in Seville as they won their second match today, 10-0 against the Spanish hosts.

Vitalii Romanchuk and Ivan Shkvarlo each scored twice in a match where the Ukraine defence denied Spain a single chance.

They now top Group C with six points, and with Argentina - 4-1 winners over Australia - level on points but with an inferior goal difference.

The Group D matches of this morning resulted in second victories for the Netherlands and Russia, who remain without a having conceded a goal.

In other group matches played at the tournament venue Ciudad Deportiva José Ramón Cisneros Palacios, training ground of La Liga club Sevilla, Russia - who beat England in the third-place match at the last World Cup in 2017 - earned a 4-0 win over Canada that puts them top of Group D.

The Netherlands drew level with Russia on points as they won 3-0 against Thailand, scoring all their goals in the second-half through Luc Pierre, who scored twice, and Jochem Kintz.