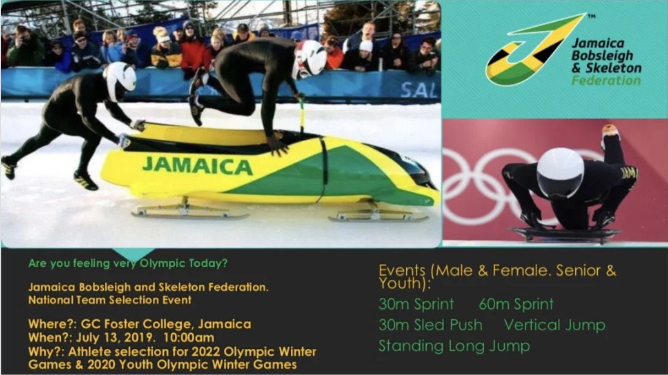 The Jamaica Bobsleigh and Skeleton Federation (JBSF) is set to host a recruitment drive this weekend as it searches for its next star.

The selection process is due to take place on Saturday (July 13) at GC Foster College in Spanish Town, near the capital city of Kingston.

The JBSF is inviting male and female athletes to take the opportunity to become a part of the national team and, potentially, the athlete delegations at the 2020 Winter Youth Olympic Games in Lausanne or the 2022 Winter Olympic Games in Beijing.

As reported by the Jamaica Star, JBSF President Chris Stokes said the participants put under consideration will be invited for further training, with the final selection process to be carried out in late September.

By way of garnering interest, the JBSF has been reaching out to various sporting clubs and high schools to recruit athletes across sporting disciplines such as rugby and track.

However, the national governing body insists the door is open to anyone interested in the sport.

"No, we don't have anyone particular in mind,” Stokes told the Jamaica Star.

"It is completely open.

"Anyone is welcome to come in.

"Rugby athletes tend to do well, but that is not a prerequisite.

"The best brakeman we have ever produced never participated in high school sports."

Jamaica is the smallest nation to have a seat at one of these influential groups.