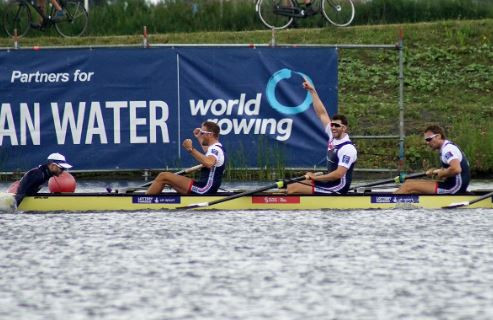 Germany’s men’s eight crew, world and European champions Germany, lost their first race since the 2016 Olympic Games today as they were beaten by the nation who had earned gold in Rio de Janeiro, Britain, at the third and final World Rowing Cup of the season in Rotterdam.

Britain had been fastest finishers in the time trials on Friday (July 12), earning them the favoured lane on a day of wind and waves, but it was Germany who took the lead by the first 500 metres marker.

The British crew moved up - and kept on going to earn a huge victory on the Willem Alexander Baan regatta course in what was the last big match-up before this season’s World Championships, due to take place in Linz-Ottensheim in Austria from August 25 and offer Olympic qualification opportunities for Tokyo 2020,

"So happy to have finally won!" Mo Sbihi, a member of the men’s four gold medallists at Rio 2016, said.

"I have so much respect for Germany as they are such a strong crew.

"We won with around three seconds today, so we just need to keep that lead-up."

Germany’s Jakob Schneider commented: "We expected GB to be a big rival and they are.

"We were good off the start and we tried our best.

"Next, we are off to Austria for three weeks of training camp and then we do our final preparations in Munich before the World Rowing Championships."

Bond added: "It’s great to be on the podium!

"It’s been a long time since the eight has been.

“The race was good but we just couldn’t hold onto Germany and Great Britain.

"I think they really showed their class in that middle part of the race."

In the final race of the day, thee Kiwi women's eight won gold by four seconds from Australia, with Canada third.

Congratulations to New Zealand🇳🇿, Australia🇦🇺 and Canada🇨🇦 for medaling in the Women's Eight 👏

New Zealand had another lift in the women’s single sculls, where Emma Twigg beat Switzerland’s Jeannine Gmelin, the 2017 world champion, to gold.

Behind them, Britain’s Victoria Thornley of Great Britain was overhauled for bronze by home rower Lisa Scheenaard, who got the nod by 0.06 seconds.

There was another  turn-up in the women’s pair, where Australia’s Jessica Morrison and Annabelle McIntyre beat New Zealand’s world champions and world best time holders Grace Prendergast and Kerri Gowler.

Australia’s Alexander Hill and Spencer Turrin took the men’s pair gold ahead of Lukáš Helešic and Jakub Podrazil of the Czech Republic.

Germany’s European champions Leonie Menzel and Carlotta Nwajide ruined their chances in the women’s double sculls final when a couple of bad strokes stopped their boat.

Switzerland’s Barnabe Delarze and Roman Roeoesli had the edge in the men’s double sculls, holding off Ireland’s Philip Doyle and Ronan Byrne

In the women’s four category that will make its Olympic debut in Tokyo next year Denmark, winners at the second World Rowing Cup, were beaten by Australia, with Romania taking third place.

The men’s four saw a win for Australia ahead of Britain.

Germany beat Ireland to gold in the lightweight men’s double sculls, while in the women’s equivalent, New Zealand beat The Netherlands to the line.

Poland won the men’s quadruple sculls ahead of Germany and The Netherlands.

Birgit Skarstein of Norway lived up to her status as favourite in the Para PR1 women’s single sculls, holding off the challenge of Israel’s Moran Samuel, the Paralympic silver medallist.