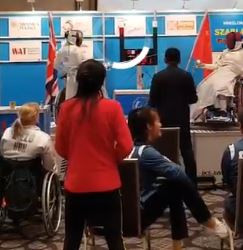 China won two more golds at the International Wheelchair and Amputee Sports Federation (IWAS) Wheelchair Fencing World Cup in Warsaw to increase to seven their tally with one more day of competition remaining.

China’s women’s épée team upset the odds by defeating Russia, one of the four top seeds, 45-38 in the quarter-finals, having crushed Italy 45-9 in the previous round.

The Chinese then overcame two of the other top seeds in beating Hungary 45-29 in the semi-final and Ukraine 45-22 in the final at the Polish capital's Airport Hotel Okecie.

The latter team had reached the final by beating Thailand 45-39 and Hong Kong 45-43.

The bronze medal went to Hungary after a 45-38 win over Hong Kong.

The Chinese men’s foil team also went all the way, winning their final against the home team 45-34 after beating France 45-31 in the quarter-finals and Russia 45-37 in the semi-finals.

At a loose end today?

Catch some of the world's top wheelchair fencers in action LIVE from the @IWASFencing World Cup in Warsaw! It's the last competition ahead of September's World Championships.

Poland’s route to the final involved a 45-30 win over Ukraine followed by a 45-43 victory over Italy, who were beaten 45-28 by Russia in the bronze medal match.

Tokyo 2020 qualification points have been available at this fourth stop of the World Cup season following legs in Sharjah, Pisa and São Paulo, and the last before the World Championships in Cheongju in South Korea between September 17 and 23.