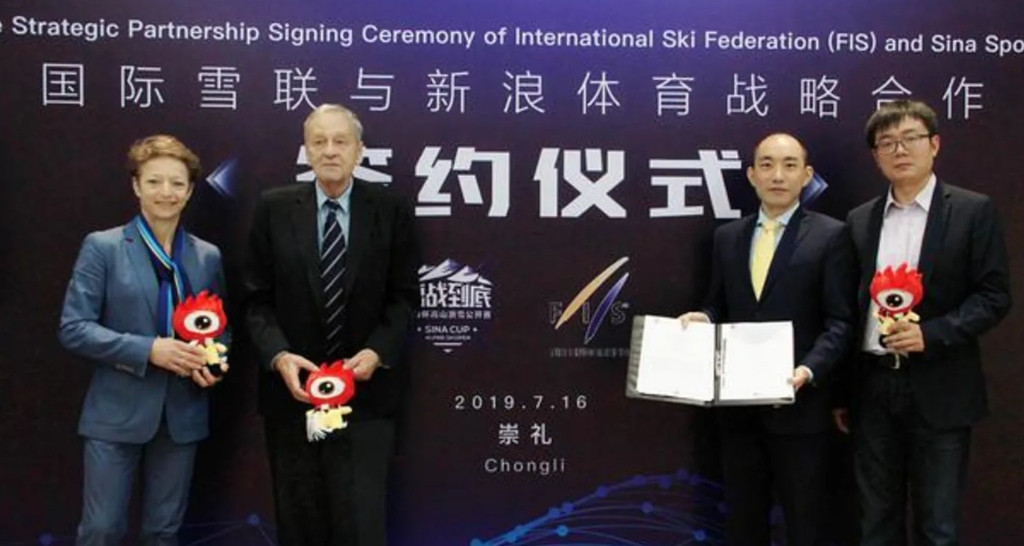 A strategic cooperation agreement has been signed between the International Ski Federation (FIS) and Chinese digital platform Sina Sports to help promote snow sports in the build-up to the 2022 Winter Olympic Games in Beijing.

The agreement was signed by FIS President Gian Franco Kasper and the world governing body's secretary general Sarah Lewis on the eve of the start of the fourth visit by the International Olympic Committee (IOC) Coordination Commission to inspect preparations for Beijing 2022.

The Memorandum of Understanding (MoU) was signed at Secret Garden resort in Zhangjiakou, which is co-hosting the Olympics and Paralympics with the Chinese capital and will stage the snow events.

The MoU centres on three main aspects, including the Sina Alpine Ski Cup, a mass participation skiing competition series in China which will be officially endorsed by FIS.

A key part of Beijing's successful bid to host the 2022 Winter Olympic Games was the promise to use the event to help encourage 300 million Chinese people take up winter sports.

It will also cover the promotion of FIS's grassroots beginners programme "Get Into Snow Sports-China" and the installation of a FIS destination on Weibo, one of the biggest social media platforms in China, which will feature coverage of FIS events and promote its activities in China such as Get Into Snow Sports.

The Sina Alpine Ski Cup competition series was created and initiated two years ago and will be the first such Alpine skiing series to receive official FIS endorsement.

The schedule for the upcoming season will quadruple the previous year’s events to more than 100, including international stops and the organisation of the competitions will also be supported on site in China by the Chinese Ski Association, who also has a close collaboration with Sina Sports as a main partner to promote snow sports.

FIS has recently established the Get Into Snow Sports-China grassroots beginner courses, executed through its educational entity, FIS Academy.

The Chinese Ski Association is a key partner of Get Into Snow Sports-China, complementing their recreational and ski instructor programmes.

As part of the strategic partnership between FIS and Sina Sports, the Get Into Snow Sports-China programme and courses will also be promoted and activated with the Sina Alpine Ski Cup event.

As key element to further promote skiing and snow sports in China, particularly to familiarise the population before Beijing 2022, the Sina media platform Weibo will establish an "Official FIS Destination" in Chinese language as part of the strategic cooperation.

The FIS media channels on Weibo will feature various coverage of FIS events and will be promoted by Sina Sports alongside the Alpine Ski Cup.

"We firmly believe that today’s important signing ceremony for a strategic partnership between Sina Sports and FIS adds another important contribution to the promotion of skiing and snow sports in China which we enthusiastically welcome," Lewis said.

"Sina Sports has a tremendous media reach and a proven track record through the sports events that they have already developed with 3x3 basketball and futsal."

"Sina Sports is delighted to be entering into this cooperation with FIS and receiving the first-ever mass participation skiing event endorsement from FIS," he said.

"We are proud to support FIS initiatives in China, including official competition events as well as the Get Into Snow Sports-China programme, in order to jointly promote winter sports in anticipation of the Beijing 2022 Winter Olympics."