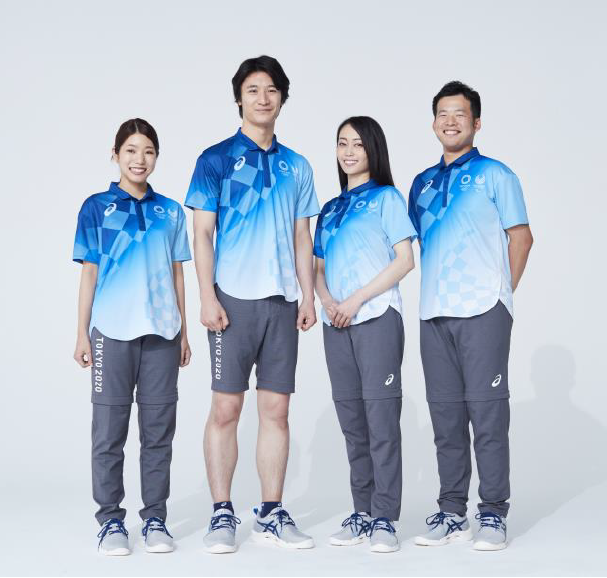 Tokyo 2020 has unveiled the official uniforms that will be worn by the more than 110,000 "Field Cast" staff and volunteers and "City Cast" volunteers during next year’s Olympic and Paralympic Games.

It is hoped the uniforms will help create a sense of pride and unity among staff and volunteers.

The "Field Cast" uniform incorporates subtly overlapping shades of the motifs and colours featuring in the core graphics used by Tokyo 2020 to create a "consistent look and feel" at venues and events.

These are overlaid by a light rendering of the Tokyo 2020 emblem itself on a "refreshing" background hue, producing a "dignified and graceful" design representative of the Games.

The uniforms are designed to suit all ages, genders and nationalities, to be easily recognisable and to harmonise with the decor of competition venues.

The "City Cast" uniform, meanwhile, is said to express affinity with the host city through striking deployment of the chequered Tokyo 2020 emblem.

It is claimed its dark blue and white patterns will allow the "City Cast" volunteers to be easily identified on Tokyo’s streets by tourists, visitors and residents.

The uniform features similar colours to those used in the "Field Cast" uniform in a bid to emphasise the unity between Games staff and volunteers and city volunteers.

Both uniforms were selected by a committee with members including Olympians, Paralympians, volunteers in the sporting field and experts from various fields.

They incorporate features to protect against heat and their composition is said to reflect Tokyo 2020’s focus on sustainability and its championing of diversity.

In terms of heat countermeasures, the uniform material has superior breathability, excellent moisture-absorbing properties and is quick-drying, making it more comfortable to wear and easy to move around in during the Japanese summer.

It is claimed prototypes were thoroughly tested during the same summer period as Tokyo 2020 and under similar conditions.

Reflecting the Organising Committee's promotion of the concept of "unity in diversity", the uniforms adopt a unisex design that will allow staff and volunteers of all ages, sizes and physical abilities to wear them comfortably.

The neck of the polo shirt features a simple snap-down button that can be easily removed.

"We believe the city of Tokyo will be much enlivened by the presence of over 11,000 volunteers and staff wearing these symbolic and colourful uniforms at venues and around the city before and during the Tokyo 2020 Games.

"In line with one of our core concepts 'Achieving Personal Best', we are looking forward to all staff and volunteers doing their best while wearing the uniforms."

The uniforms and various complementary items of clothing and accessories have been designed and produced in association with Tokyo 2020 official sportswear provider ASICS Corporation.

The trousers, shoes and socks for the "Field Cast" and "City Cast" are of an identical design.

To make them more comfortable in hot weather, the trousers are made with flexible and breathable material incorporating a mesh fabric around the waist area.

The lower sections of the trousers are detachable, allowing them to be worn as shorts when temperatures are high.

Reflecting Tokyo 2020’s focus on sustainability, the shoes have been coloured utilising a special dyeing process which uses a minimum amount of water, and some recycled polyester and plant materials have been integrated into the manufacturing of the uniforms.

The uniform for the "Field Cast" will be distributed from May 2020 to those living in Japan, while those coming from overseas will receive their uniforms after they arrive in the country.