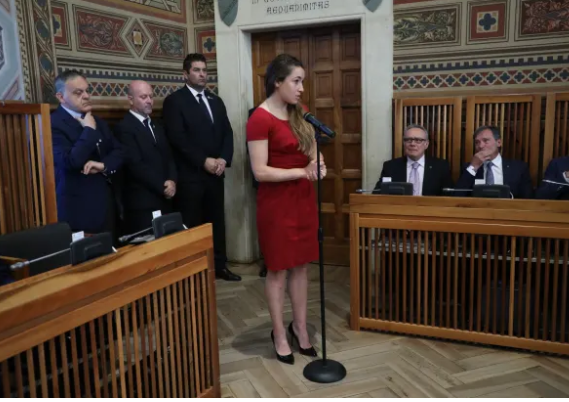 Olympic downhill champion Sofia Goggia has been awarded the Knighthood in the Order of Saint Agatha in San Marino.

The tiny European country presents the accolade to foreigners who positively contribute in fields such as charity, art, politics and sport.

Goggia won her Olympic title for Italy at Pyeongchang 2018 and won the overall downhill World Cup title in the same year.

Last month, she attended the International Olympic Committee Session in Lausanne to be part of the final presentation for Milan and Cortina d'Amprezzo's successful 2026 Winter Olympics and Paralympics bid.

The Italian candidacy defeated Stockholm and Åre in Sweden.

San Marino is completely surrounded by Italy with Goggia receiving her award at the country's Government Palace.

She was welcomed by the two Captains Regent of San Marino – the country's heads of state – Nicola Selva and Michele Muratori, as well as secretary of state for sport Marco Podeschi.

"It was a clear sign of destiny that I received this particular reward exactly one month after the Milano-Cortina 2026 Olympic Games election.

"I was at the forefront of the Italian delegation in Lausanne, and it is curious and interesting how, even today, I find myself in a political context linked to sport.

"I've never been to San Marino, and I didn't know the region so I want to thank the San Marino Federation and the Council of State for this invitation.

"This day will certainly remain a wonderful memory for me."

Flavio Roda, the Italian Ski Federation President, is another recipient of the Order.

"Sofia Goggia's statement is particularly valuable because it represents for many young people a point of reference and an incentive to have confidence in themselves and their abilities," the Captains Regent said in a statement.

"Having a good example like Sofia pushes the next generation to make serious efforts to strive for achievement in every area, to obtain the best possible results."