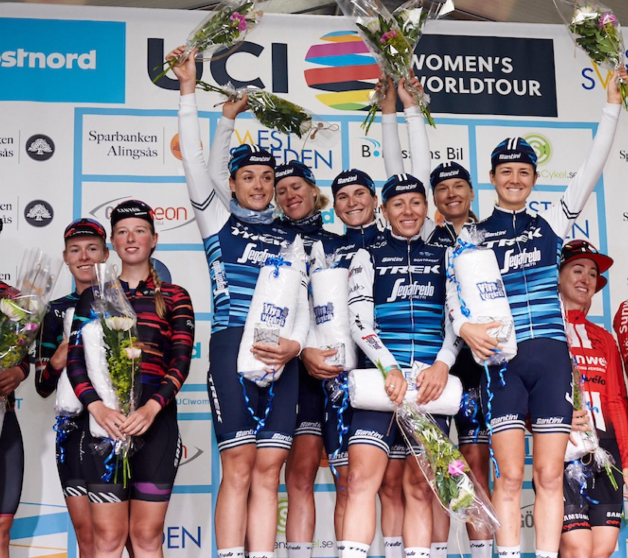 The race, part of the UCI Women's World Tour, saw 14 teams compete in a time trial over 36 kilometres between Vårgårda and Herrljunga.

The triumph continues Van Dijk's run of success after victory in the time trial at the European Road Championships, while Longo Borghini improves on the bronze earned in the mixed team relay.

The third last team to start: @TrekSegafredo. Cordon-Ragot, Longo Borghini, van Dijk, Wiles, Winder and Worrack - by the names this might be the favourites today! #vargardawwt #uciwwt pic.twitter.com/VjiWXDHkQJ

Trek-Segafredo were the 12th team to set out on the course amid blustery conditions and came home in a time of 43min 53sec.

Silver went to Canyon–SRAM, who finished 25 seconds down on Trek-Segafredo, while Team Sunweb took bronze, 46 seconds slower than the winners.

Boels-Dolmans, who had won this event in the previous three years and went out last, could only finish fourth, despite a team that includes world and Olympic road race champion Anna van der Breggen, newly-crowned European champion Amy Pieters and former world champion Chantal Blaak, all of whom are from the Netherlands.