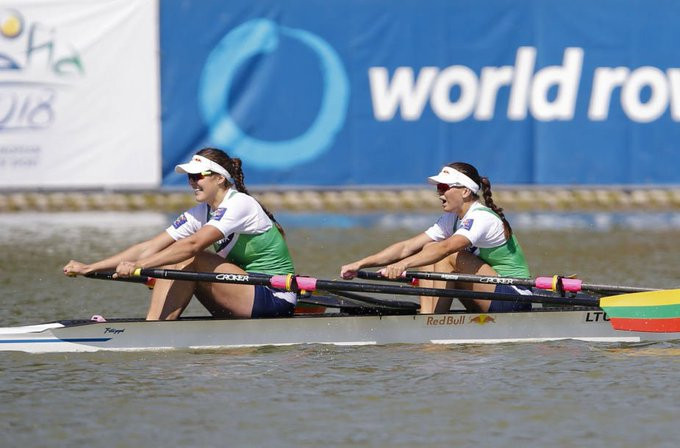 Women's double sculls defending champions Milda Valčiukaitė and Ieva Adomavičiūtė of Lithuania finished a disappointing fourth in their heat at the World Rowing Championships in Austria.

The duo had triumphed in the Bulgarian city of Plovdiv last year, but struggled in heat four today to finish in 7min 02.850sec.

Cicely Madden and Genevra Stone of the United States won the heat in 06:56.360, with Gabrielle Smith and Andrea Proske of Canada second in 6:58.630 and Italian pair Stefania Buttignon and Stefania Gobbi third with 07:01.220.

Current world silver medallists Brooke Donoghue and Olivia Loe of New Zealand triumphed in heat three with 07:03.150, while Roos De Jong and Lisa Scheenaard of the Netherlands recorded the fastest time in the qualifying, topping heat one in 06:58.530.

Australia's Amanda Bateman and Genevieve Horton were the leaders in heat two with 07:00.210.

Valčiukaitė and Adomavičiūtė will have another chance to progress in the repechage round.

In the men's lightweight pairs, Italy's Giuseppe Di Mare and Raffaele Serio were the fastest to qualify, managing 06:41.540 in heat one.

Brazil's Vangelys Reinke Pereira and Emanuel Dantas Borges finished behind them in 06:49.050, while Jiri Kopac and Jan Hajek of Czech Republic topped heat two with 06:52.800.

Italy narrowly achieved the best time in the men's lightweight quadruple sculls with 05:56.640, closely followed by China in 05:56.890.

Heats continue tomorrow in the women's quadruple sculls and eights, alongside the men's eights.