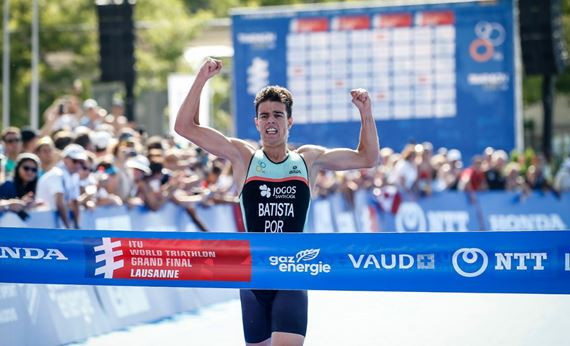 Portuguese Batista described his victory as unbelievable, after outsprinting Australian Lorcan Redmond in the final 300 metres to claim gold.

He said: "I have trained very hard and long for this, since my first year as a junior.

"I was worried on the bike course because we had too many athletes in our group, so I was just trying to stay safe and save some legs.

"And then out of T2 I felt really strong and was able to drop many athletes."

Batista was 10 seconds back going into the four-lap bike course.

A group of 32 riders entered the second transition, with Czech Republic's Radim Grebik and Switzerland's Sasha Caterina leading the pack.

Australian Joshua Ferris moved to the front, before Batista accelerated on the climbs.

Batista edged ahead of Ferris and Frenchman Boris Pierre, with Redmond in hot pursuit.

In the closing stages, just Batista and Redmond were left to contest the gold medal, and the Portuguese had the legs to sprint clear, winning by almost 10 seconds.

In the women's race, Mallozzi looked in some discomfort, clutching her stomach in the closing stages, before gritting her teeth and surging past training partner Costanza Arpinelli to take the junior title.

A false start saw the triathletes climb back onto the pontoon for a restart.

Portugal's Gabriela Ribeiro led a group of five out of the water and onto the bikes in Lausanne.

Two packs formed, with Hong Kong rider Bailee Brown at the head of an 18-strong group, with Swiss rider Anja Weber attempting to string out the field in the early stages.

Mallozzi was in the chasing group of 17 riders who cut the gap down to 20 seconds over the four-lap bike section.

As the run began, Jessica Fullagar of France pushed the pace as Mallozzi, Arpinelli and Hannah Knighton of New Zealand kept close attention.

The efforts of Knighton and Fullagar on the bike proved costly as they wilted on lap two.

Arpinelli was in the box seat for gold with 500m to go, as Mallozzi held her stomach, but the European junior champion found an extra gear to sprint past her compatriot for glory in 1:00.41.

Roberto Sanchez Mantecon of Spain claimed glory in the men's under-23 race, clocking 1:50.20 in topping the podium.

Hungarian Csongor Lehmann was second in 1:50.36 as Ran Sagiv of Israel took the last step on the medal rostrum in 1:50.50.

The elite men's and women's races are tomorrow.