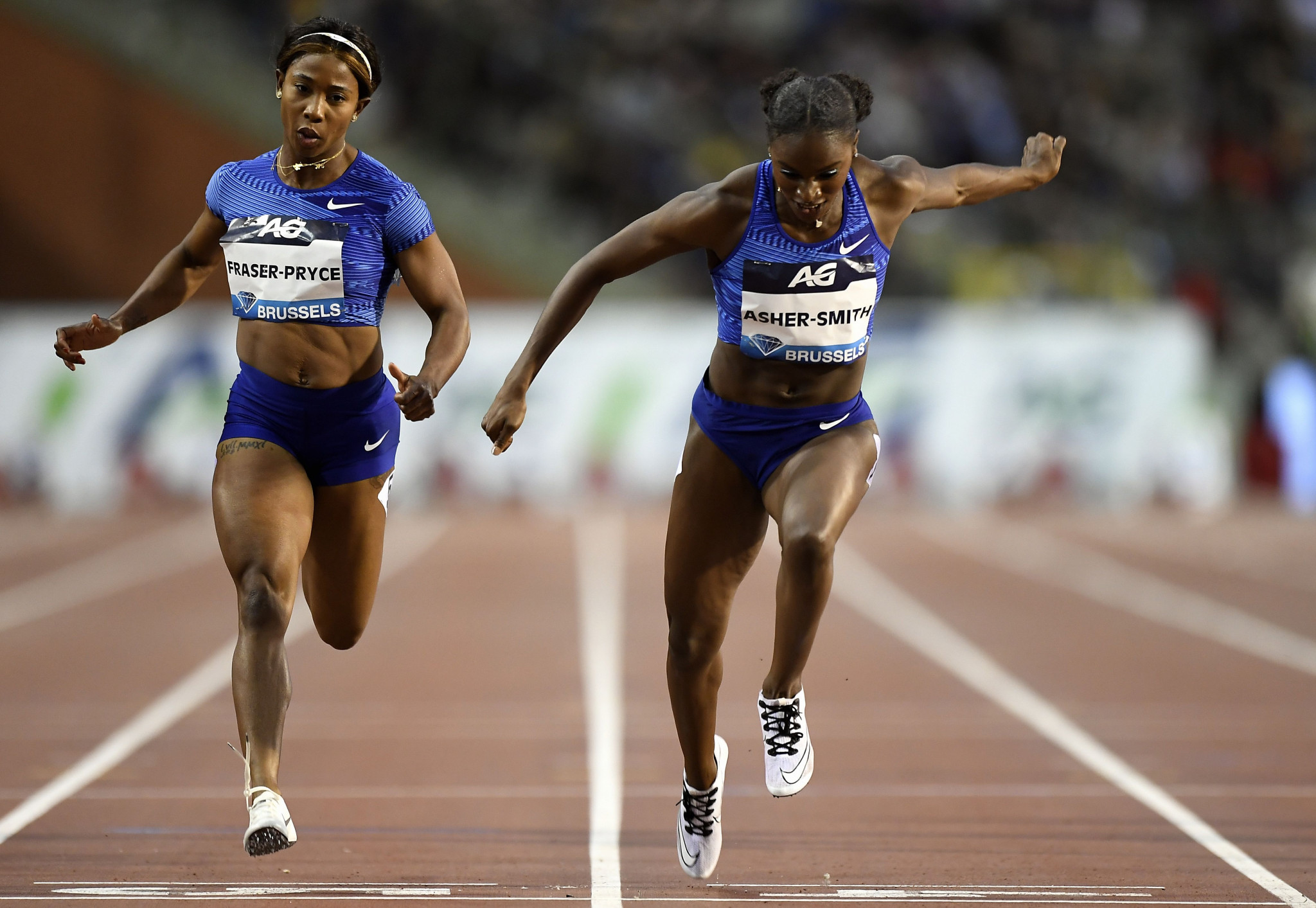 Dina Asher-Smith won her first International Association of Athletics Federations Diamond League title as she ran a season’s best in the women’s 100 metres final at the second of the finals in Brussels.

A time of 10.88sec in cool and rainy conditions at the King Baudoin Stadium was enough for Asher-Smith, the European 100 and 200m champion to hold off the favourite, Jamaica’s 2008 and 2012 Olympic champion Shelly-Ann Fraser-Pryce.

Asher-Smith, who has generally regarded as a 200m specialist who sharpens up very effectively over the shorter distance now goes to the World Championships that start in Doha later this month with brimming possibilities in both distances.

Particularly as the Rio 2016 400m champion, Shaunae Miller-Uibo, will be unable to double up with the 200m due to the programming of the events.

Taylor, the world and Olympic triple jump champion, has made it a career habit to win when it is most important.

Despite consecutive Diamond League losses to his perennial rivals, Pedro Pablo Pichardo of Spain and US compatriot Will Claye, who leads this season’s world rankings with 18.14m, Taylor found the way to win again tonight as he set a meeting record of 17.85m.

Meanwhile there was startling news from Andújar in Spain regarding the women's triple jump, where Venezuela's world champion Yulimar Rojas, who could only finish second in last week's Diamond League final in Zurich, improved her personal best from 15.15 to 15.41m - just nine centimetres shy of the world record set by Inessa Kravets at the 1995 IAAF World Championships in Gothenburg and the second best of all time.

In the men’s sprints, Noah Lyles of the United States, who heads the season’s 200m lists with a clocking of 19.50 at the Lausanne Diamond League, indicated his own favourite status in the one event he will contest in Doha as he won in 19.74 to earn his third consecutive Diamond League title.

That meant Lyles, who was running despite a stomach upset, was the first athlete to win the Diamond League 100 and 200m titles in the same season.

Also doubling up was Sifan Hassan, who broke the women’s mile world record earlier this season, as she added another honour to her 2019 CV in winning the women’s 5,000m title in a time of 14min 26.26sec ahead of Letesenbet Gidey of Ethiopia, who clocked 14:29.54.

Well done to all competing this season and thanks to all who tuned in! 👏

Timothy Cheruyiot of Kenya looks odds-on to follow world 1500m silver in 2017 with world gold this year following his victory tonight in 3min 30.22sec, as he headed off Norway’s 18-year-old double European champion Jakob Ingebrigtsen, second in 3:31.62 ahead of his brother Filip, who clocked 3:33.33.

Soufiane El Bakkali, who heads this year’s world lists in the men’s 3000m steeplechase, missed winning the Diamond League title by one place for the second year in succession as Ethiopia’s Getnet Wale claimed the prize in a sprint finish, clocking 8:06.92 to the Moroccan’s 8:07.08.

Michael Norman, beaten by Fred Kerley at last month’s US trials, switched the result in the men’s 400m as he earned the title in 44.26, with his compatriot, the defending champion, coming second in 44.46.

Britain’s heptathlete Katerina Johnson-Thompson excelled in one of her strongest events to take third place with 6.73m.

Danielle Williams of Jamaica, the 2015 world 100m hurdles champion, maintained her position as favourite to win her title back as she won in 12.46 ahead of Kendra Harrison of the United States, world record holder with a best of 12.20, who clocked 12.73.

In the opening event of tonight’s programme, Croatia’s world and Olympic champion Sandra Perkovic , who has made a late start to the season due to injury, made a brave defence of her women’s discus title but finished second on 66.00m, with Cuba’s Yaime Perez claiming the prize having thrown 68.27.

Shubenkov’s Russian compatriot Mariya Lasitskene, the world high jump champion, retained her title with an effort of 1.99m from Ukraine’s world silver medallist Yuliya Levchenko, who cleared 1.97, and Belgium’s Olympic, world and European heptathlon champion Nafissatou Thiam, who had a best of 1.95 on her home ground.

Daniel Stahl of Sweden won the men’s discus title with a best of 68.68m.