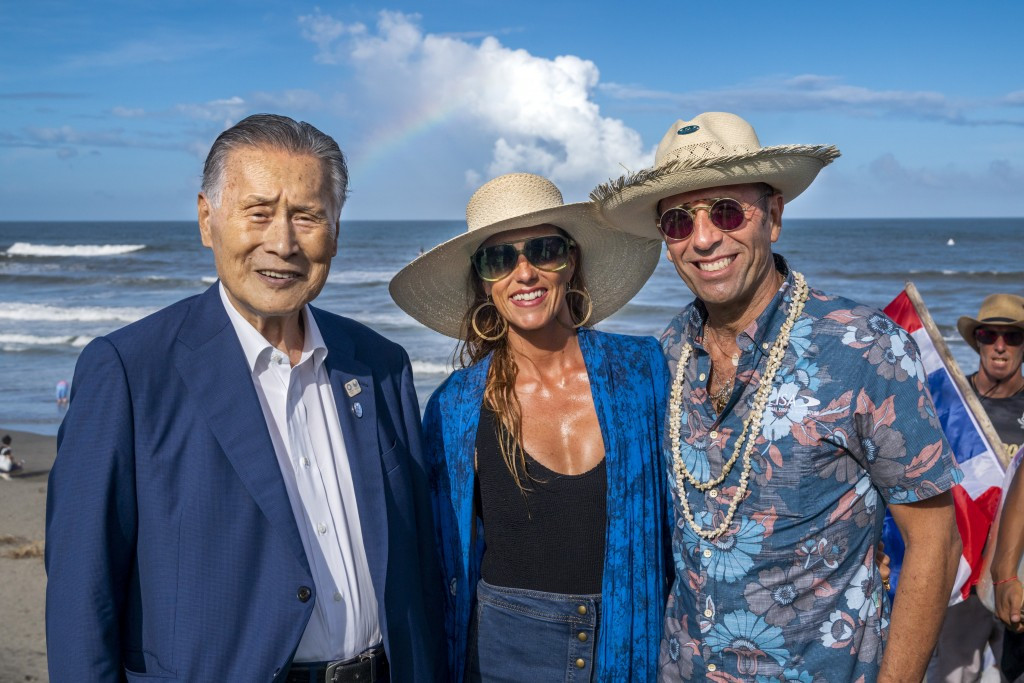 Tokyo 2020 President Yoshirō Mori was among the spectators as the International Surfing Association’s (ISA) World Surfing Games got underway in Miyazaki in Japan.

A total of 240 athletes from 55 nations are involved in an event offering four qualifying spots for Tokyo 2020, where surfing makes its Olympic debut.

Mori, who has been a strong supporter of surfing’s Olympic ambitions, toured the event site accompanied by ISA President Fernando Aguerre and the Tokyo 2020 leadership team.

The highest placed eligible athlete from Africa, Asia, Europe and Oceania will book their place at next year's Games.

The direct qualifiers from the Americas were decided at last month's Pan American Games, where surfing featured for the first time.

The day began with a Parade of Nations by the athletes, followed by a Sands of the World Ceremony, where two representatives of each country took to the stage and poured sand from their local beaches into a container.

Aguerre poured the last jar of sand into the container, sand collected from the beach at Barra da Tijuca in Rio de Janeiro, Brazil on the day the official vote to include surfing in the Olympics took place during the Rio 2016 Games.

"I would like to give a warm welcome the 55 national teams, especially to Sri Lanka, Thailand, American Samoa and Lebanon for their first time at the World Surfing Games,” said Aguerre.

"It is great to have the WSL Championship Tour surfers here today, returning to their national surfing teams as part of the Olympic qualification process.

"In 1996 I had a dream that the best surfers in the world would compete on their national teams such as in football, rugby and tennis.

"It has finally come true today in Miyazaki.

“For that reason, I will never forget this day.

"We are all living our dreams.

The opening rounds of competition took to the water following the Opening Ceremony, with the women starting their preliminary competition at Kisakihama Beach.

Caroline Marks of the United States was the top performer, earning the highest wave score of nine and heat total of 17.23.

Peru’s Sofia Mulanovich also excelled, earning two waves of 8.6 and 8.17 to finish with the day’s second highest heat total of 16.77.

Annissa Tita Flynn made history as the first Thai surfer to compete at the ISA World Surfing Games.

Her score of 8.36 was not enough for her to progress after her heat, but she will get a second chance to advance through the repechage rounds.

Men’s competition is due to start on Tuesday (September 10).