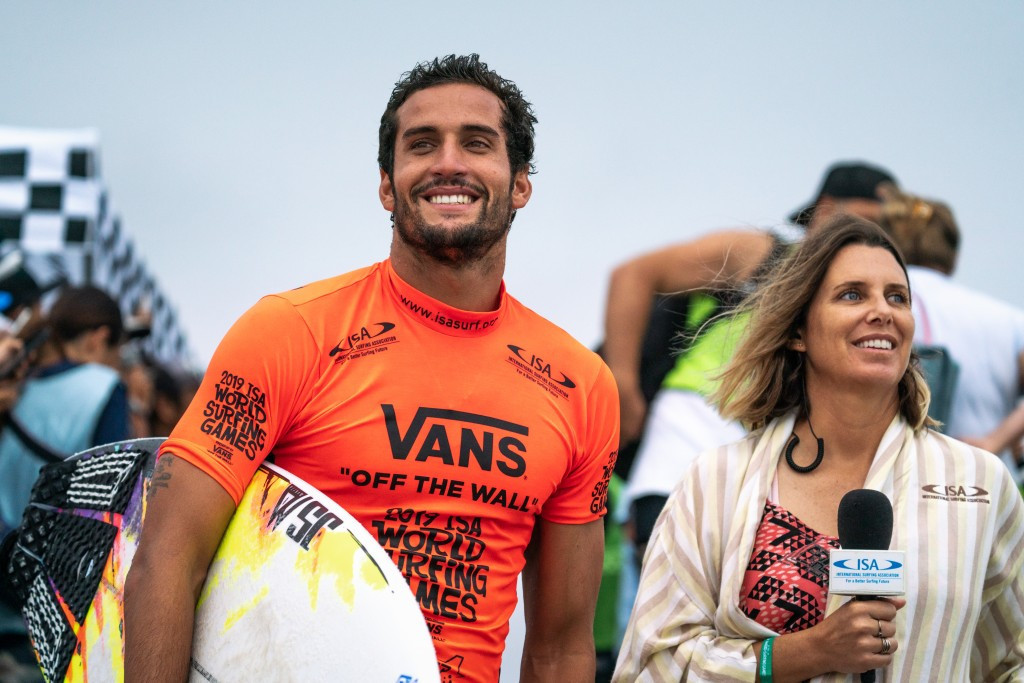 The continental slots for Europe and Asia are still to be claimed, as this key International Surfing Association event moves towards the gold medal stages this weekend, when the men's individual and team medallists will be determined.

With Japan's Kanoa Igarashi likely to qualify for Tokyo 2020 via the 2019 World Surf League Championship Tour, the remaining eligible surfers vying for the Asian continental slot are Japan's Shun Murakami and Hiroto Ohhara, along with Indonesia's Rio Waida.

Depending on the conditions at Kisakihama Beach, champions could be determined tomorrow or on Sunday.

After a day full of repechage elimination rounds, team rankings are clearer, as Brazil held on to the lead with Ferreira and Medina remaining in the main event.

Team USA is in close pursuit in silver medal position, with both Slater and Andino unbeaten.

After losing in his first main event heat, the 2018 and two-time men's gold medallist Santiago Muñiz of Argentina battled through a marathon day of repechage heats to remain alive in the competition.

"It's been a long road after losing my first heat," said Muñiz.

"Winning gold two times was already a dream, so it's hard to imagine a third."

Slater told ISA: "There is a funny little balance of power between the 'favourites' and the guys from countries that you don't know surfing is a big part of.

"It's nice when you see one of the underdogs win a heat.

"The biggest surprise for me this week has been seeing a team from Iran and Afghanistan.

"It's cool to see that the culture is alive and well in those places.

"I think surfing has a culture that hasn't yet been seen in the Olympics - our community is such a varying group of people.

"As I am here seeing all the different competing countries, I think that surfing will be a good fit in the Olympics."

ISA President Fernando Aguerre added: "We are witnessing history in the making at the World Surfing Games.

"Today we saw an additional two surfers provisionally qualify for the Olympics.

"These are surfers that will be thrust onto the world's greatest sporting stage, and become household names around the world."