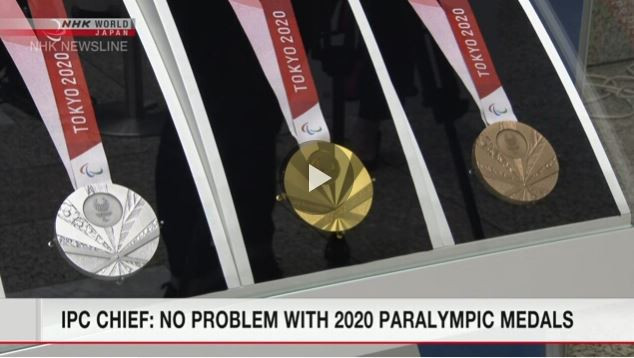 Andrew Parsons, President of the International Paralympic Committee, has ruled out a request by South Korea to change the design of the Tokyo 2020 Paralympics medals because they allegedly resemble the "Rising Sun" flag.

Speaking after a meeting in Tokyo with delegates of nations taking part in the Paralympics, Parsons confirmed a request to review the medal design by South Korea, which has already protested to Olympic Games organisers about an image it associates with its occupation by Japan from 1910 to 1945.

During that time, Korean athletes were obliged to represent Japan at the Olympics with altered names.

Parsons said the medals use Japanese folding fans as a motif and are beautifully designed, and the IPC believes there is no need for a review.

Parsons added that he received a letter from South Korea on Wednesday (11 September) requesting a ban on bringing the "Rising Sun" flag into venues for the Tokyo Paralympics.

Parsons said the IPC does not have particular rules on that issue and suggested it was a political rather than a sporting matter.

South Korea's sports ministry has also asked the International Olympic Committee (IOC) to ban the flag at the Tokyo Games, saying it is a symbol that reminds people of historic scars and pain.

The IOC has responded that sports stadiums should be free of any political demonstrations, and it will look at any concerns that arise at the Games on a case-by-case basis.

Japan's new Olympics Minister Seiko Hashimoto yesterday rejected South Korea's request, telling Bloomberg: "On the issue of whether the Rising Sun Flag conveys a political message, I don't see it that way at all."