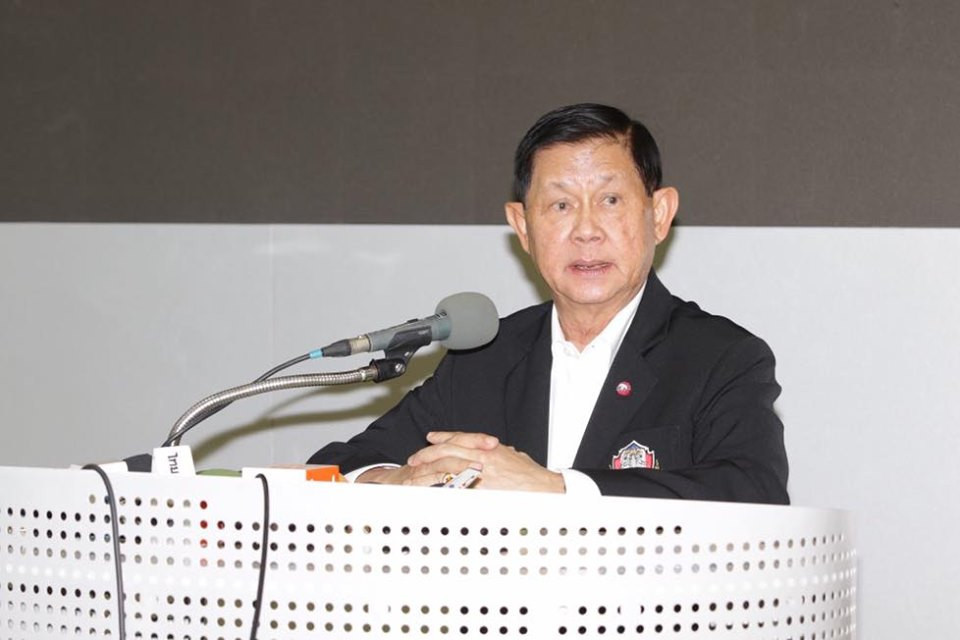 The Thai Amateur Weightlifting Association (TAWA) will find out next week if it can send its athletes to the 2019 Southeast Asian Games in The Philippines, despite a self-imposed exile from its home World Championships here for multiple doping offences.

Speaking in a press conference at the venue here today, TAWA Honorary President Intarat Yodbangtoey said the national federation has asked only to send its youth and junior athletes to participate in the event, which is due to take place from November 30 to December 11.

Yodbangtoey, the first vice-president of the International Weightlifting Federation (IWF), claims this will be the "foundation of our next generation in weightlifting".

The IWF is set to make a decision on the matter next Thursday (September 26).

Thailand caused a major surprise last month by declaring that it wanted to compete at the 2019 IWF World Championships, which begun today.

But the country's hopes were swiftly doused by the IWF, which said "no Thai athletes will be entitled to participate".

TAWA suspended itself from international competition in March, but changed its mind and said it wanted its athletes to take part in Pattaya and to have a chance to qualify for the Tokyo 2020 Olympic Games.

Of the nine members of Thailand's team who tested positive at Ashgabat 2018, three had won gold medals and two, Sukanya Srisurat and Sopita Tanasan, were winners at the Rio 2016 Olympics.

Samples originally came up clean but when they were further tested at a laboratory in Cologne, the positives emerged.

News of the violations came out in stages, painting an ever worse picture for the TAWA in December, January, February, when two athletes who had already been suspended came up positive again, and April.

By the time of the final suspension announced on April 4 – by which date Thailand had a total of 12 unresolved doping violations within a year – TAWA had suspended itself from international competition.

On March 7, TAWA made an announcement "in order to keep in existence our high honour and proud dignity", making three undertakings:

*Thai athletes would not compete internationally "until the situation unfolded";

*They would not take part in the Tokyo 2020 Olympic Games or any of its qualifying competitions – of which the World Championships is the most important one;

* Thailand would carry on hosting the 2019 World Championships, without any of its athletes taking part, "so as to express our accountability for the Thai nation and all member federations of the IWF".

TAWA changed its mind, however, and said it wanted athletes who had not tested positive to compete in Pattaya and have a chance to qualify for the Olympics, though none of the "clean" Thai lifters is well placed in the rankings.

According to Agence France-Presse, Yodbangtoey, believes the athletes who tested positive in Turkmenistan were given a pain relief gel by a former coach.

They were unaware that the gel contained traces of an anabolic steroid.

Yodbangtoey also believed his nation had been singled out for rigorous testing, and said, "Where is the justice?"

The International Olympic Committee (IOC), which put weightlifting "on probation" for nearly two years until May because of past doping problems, will have taken note.

In May, the IOC gave weightlifting the all-clear for inclusion at the Paris 2024 Olympics and beyond, after the IWF adopted a tough new anti-doping policy, a new Olympic qualifying system, and other changes.

Speaking here today, Yodbangtoey claimed he sacrificed himself to maintain the overall image of weightlifting worldwide.

"If there is no weightlifting in the 2024 Olympics, this sport would get stuck," he said.

"Therefore, we need to stop ourselves just for now and create new generations for the coming future.

"In the next five years, we hope that our young athletes will be ready for future competition, so we need to return to international competition as soon as possible."

"As a result, we need support from every organisation such as Sports Authority of Thailand, Doping Control Agency of Thailand, and laboratories, and every sports association needs to be educated regarding this matter.

"We hope that this case will not happen again with other associations.

"Lastly, TAWA would like to apologise with deep regret that we cannot bring the happiness to Thai people like in the past."