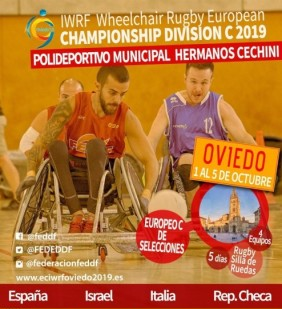 The competition will mark Spain's first appearance in an IWRF sanctioned event.

The hosts will stage the three-day competition at the Polideportivo de Ventanilles in Oviedo.

Action will take place from October 3 to 5.

Four teams will participate in the tournament, with Spain set to take on the Czech Republic, Israel and Italy.

A round-robin format will operate for the opening stages of the tournament.

All four teams are guaranteed a place in the semi-finals, with the group winner taking on the fourth-placed finisher.

The winners of the semi-finals will meet in the gold-medal match on Sunday (October 5).

The duo will also qualify to the IWRF 2020 Division B Championship.

A bronze-medal match will also take place on the final day of action.

The IWRF say the divisional championship structure has been designed to allow all their member countries the chance to compete and improve their rankings.

A total of 18 member nations come from Europe, with a further five countries also developing the sport on the continent.